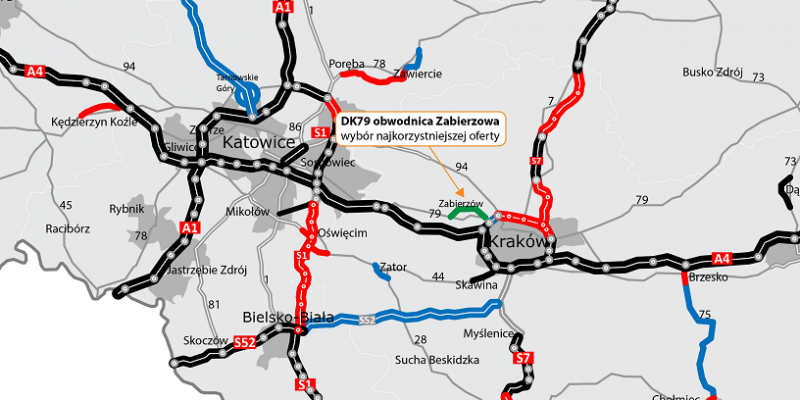 A consortium of Strabag Polska (leader) and Strabag (partner) have submitted the most advantageous bid in the tender for building the Zabierzów bypass on the DK79 route. The investment is said to be cost nearly PLN 590 million. The selection of the offer was possible thanks to the rise in funds assigned for this investment by the Minister of Infrastructure.

The contractor is going to construct a bypass with a length of about 10.3 km in the GP class (main road of accelerated traffic). At the opening route which is behind the Modlniczka junction, the bypass will be a dual carriageway, and in the further part, it will be a single carriageway. On the northern side, it will bypass the built-up areas of Zabierzów near Kraków.

Moreover, the new bypass will serve the adjoining areas thanks to the construction of collective roads and three intersections: in Zabierzów, Bolechowice and Rudawa. Engineering structures will be constructed, containing a 300 m long tunnel, four bridges, seven viaducts, a footbridge and a roundabout. Infrastructure is going to be reconstructed, comprising energy and telecommunications, plus water, sewage and gas networks. Drainage, retention reservoirs, animal passages, acoustic screens and road lighting will also be built.

Zabierzów and the surrounding towns are placed in the vicinity of the Krakow Valleys Landscape Park. Because of the proximity of Krakow and natural values, they are not only a place to live, but also a destination that is often visited for recreational purposes. Accordingly, a lot of local traffic is also created.

The national road no. 79 also passes through the transit between Kraków and western Małopolska and the Śląskie Voivodeship.

According to the analyzes than has been done in 2020/2021 as part of the General Traffic Measurement, an average of 21.4 thousand vehicles passes through Zabierzów daily. Because of the heavy traffic, the inhabitants and local authorities made efforts to construct a bypass. The construction of a bypass is going to allow transit traffic to exit the city center, improving the safety and comfort of life of the residents.

All works, which contains obtaining an occupancy permit, should be completed within 37 months of signing the contract, but the winter periods, i.e., from December 16 to March 15, will not be counted until then.

The bypass is going to be constructed as part of the government’s National Road Construction Program for 2014-2023 (with an outlook until 2025).