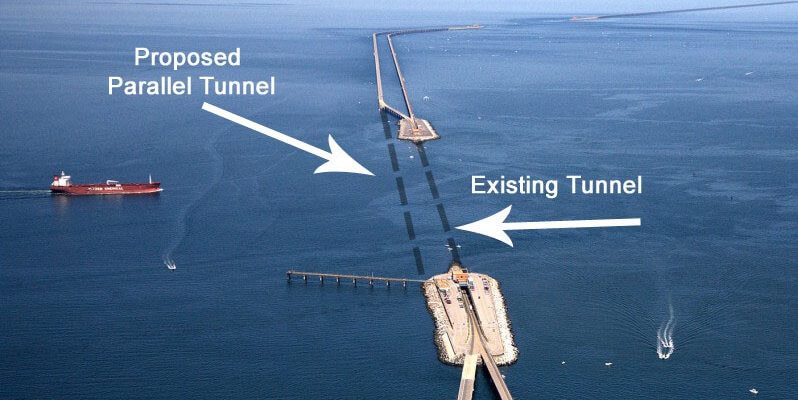 In order to construct the Parallel Thimble Shoal Tunnel as part of the available Chesapeake Bay Bridge-Tunnel (CBBT) crossing, the US Department of Transportation (USDOT) has awarded a loan of up to US$338.6M (£256M).

Starting its construction from October 2017, the new 1.7km two-lane road tunnel under Thimble Shoal Channel in the US state of Virginia, the loan will somewhat finance this tunnel.

The responsible for the management of construction in this project is the Chesapeake Bay Bridge-Tunnel District, hence the direct Transportation Infrastructure Finance and Innovation Act (TIFIA) loan, provided by the USDOT’s Build America Bureau, was given to them.

Locating in 41m beneath the surface, the new tunnel with an outer diameter of 13m is going to link to the CBBT, which is a structure with 28.3km length connecting the Norfolk/Virginia Beach areas to Virginia’s Eastern Shore.

First opened to traffic in 1964, the CBBT crosses over and under open waters where the Chesapeake Bay meets the Atlantic Ocean and provides a direct link between south-eastern Virginia and the Delmarva Peninsula.

Over than 19km of the low-level trestle in each direction, two 1.6km tunnels each running under a shipping channel, two bridges, around 3.2km of the causeway, four manmade islands, and over 8km of approach roads, are the current subsets of this structure.

The approximate amount of removed soil all construction long by the project’s TBM Chessie is 382,277m³, while almost 9,000 individual concrete pieces and 32,111m³ of concrete are due to be used to make the tunnel sections.

“The announcement will help the community save millions of dollars, address the economic harm caused by the pandemic, and keep important public works projects moving forward,” added Farajian.

The determined date for finishing this tunnel is 2024, while it also going to be funded through the sale of revenue bonds, a Virginia Transportation Infrastructure Bank (VTIB) loan, and monies from the district’s General Fund.

Disassembling the TBM Back Office Gates, a Diaphragm Wall and a Blind Tunnel in Świną Tunnel Project