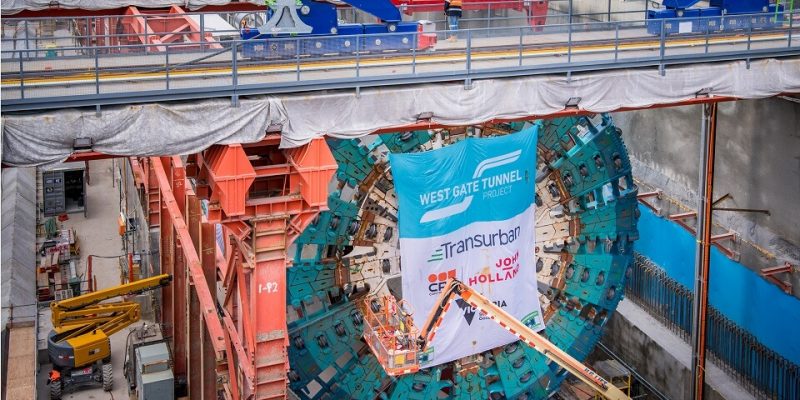 Digging process of the West Gate Tunnel has been commenced using the largest tunnel boring machine (TBM) in the Southern Hemisphere.

While in order to construct the alternative to the West Gate Bridge the giant TBM Bella was sent on its journey beneath Melbourne’s western suburbs, currently it is working its way through the earth below Yarraville and is due to travel for 18 months, tunneling the outbound tunnel with 4km length that will meet up with the West Gate Freeway in Altona North.

Moreover, the building of the 2.8km inbound tunnel, is going to start with the use of the second TBM, named Vida.

These TBMs, which are named after Bella Guerin and Vida Goldstein, have15.6m diameter and 90m length, weighing in at 4000 tons each, which is about the same as 20 Boeing 747 airplanes.

Including a state-of-the-art computerized navigation system, the daily average performance of these intended TBMs will be 9m. The reason for choosing these machines for this project is their ability to work deep underground with almost no disturbance above ground for traffic, businesses, and residents.

The TBMs are being piloted by a highly trained specialist crew who will work around the clock while the tunnel is being built.

Installation process of massive concrete rings to form the structural and waterproof lining of the tunnel, is implemented by a mobile factory, whereas the TBMs bore through the earth.

Additionally, crews of up to 20 people are going to then work to build the road surface and install electrics, ventilation, and safety systems.

Excavated soil will be taken to a specially built facility operated by Hi-Quality in Bulla.

In order to ensure they’re working effectively before starting their drive, the TBMs have been through a thorough testing and launching phase within the project site in Yarraville.