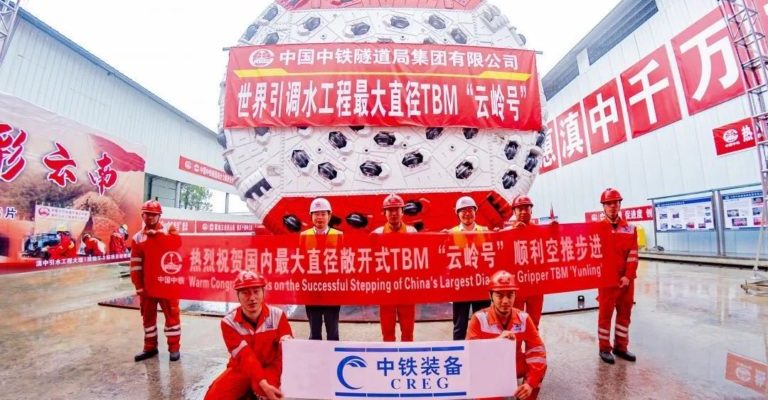 The TBM groundbreaking and construction of the 7km long Serravalle tunnel, the second longest tunnel for the Terzo Valico dei Giovi high-speed/high-capacity railway network being built in Italy by Consorzio Collegamenti Integrati Veloci (COCIV), headed by Webuild, has been celebrated.

The achievement, which takes the total amount of excavation completed to 65 percent, creates an uninterrupted link among the work sites along a 22-kilometer stretch of the railway on the project’s Piemonte hand.

The breakthrough was observed by Italian Infrastructure and Sustainable Mobility Minister Enrico Giovannini, who was linked remotely, inside a chamber on the Serravalle tunnel at the Libarna site near the municipality of Arquata in the province of Alessandria.

“I see there is a big political debate over the Recovery Plan, which foresees investments in infrastructure over a period of six years for nearly €50bn, representing 0.5% of GDP,” stated Salini. “These resources need to be put together with other sources of financing. Before COVID-19, the country spent about 2% of GDP in infrastructure. So, to revive the economy, we need a big boost and more spending. We’re talking about at least €300bn, which is in line with investments being made by other European countries in infrastructure. I hope to be able to see projects for new infrastructure start soon with a long-term vision for our country. There are no sustainable countries where there are no jobs. It is the creation of employment that should be at the top of everyone’s minds, as is foreseen in Article One of our Constitution.”

TBM Giovanna excavated the Serravalle tunnel for 6.4km and finished its work in September 2020, while TBM Elisa made this most recent breakthrough. And have a diameter of 10m. The bored faced dynamic obstacles, such as the alignment running under the Serravalle Outlet and the ancient Genoa-Turin railway, both of which necessitated the use of groundbreaking control devices both above and below ground.

The Genoa-Milan connection would shorten travel times between the two cities and contribute significantly to Terzo Valico dei Giovi’s commitment to sustainable mobility. The railway, which will be 53 kilometers long, will link Genoa on the Mediterranean Sea to Rotterdam on the North Sea via the Rhine-Alpine corridor of the Trans-European Transport Network (TEN-T). The railway will have four stations.

Future of Bauma and trade shows is ‘mixed