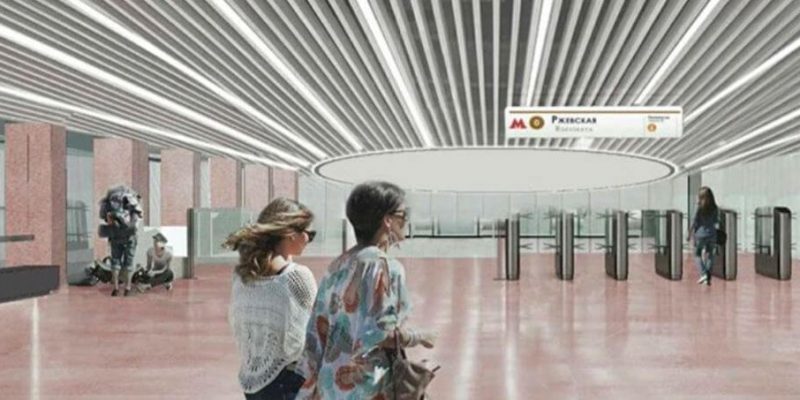 Andrey Bochkarev, Deputy Mayor of Moscow in the Moscow Government for urban planning policy and construction announced that the building of the passenger platform has been started at the Rizhskaya station of the northeastern section of the Big Circle Line (BKL) of the Moscow Metro.

He added: ” Mining operations have been fully completed at the BKL Rizhskaya station. Monolithic work is 85% completed, the installation of the passenger platform structures has begun, and the laying of concrete on the first section has already been completed.”

The Deputy Mayor also indicated to the completion of around 75% of the installation of internal walls and partitions.

He asserted: “The installation of four escalators and engineering systems continues. It should be noted that “Rizhskaya” is being built in a closed way at a depth of more than 60 meters, like another station in the northeastern section.”

“Architectural and finishing work continues in the vestibule of the Rizhskaya station. The lining of the walls of the passenger area with Shimanovsky granite in light gray tones has begun. At the same time, in the technical rooms of the lobby, the finishing is already nearing completion,” stated Yuri Kravtsov, Director General of Mosinzhproekt JSC (general designer and general contractor for the construction of new lines and stations of the Moscow metro).

Through a transfer with the station of the same name of the Kaluzhsko-Rizhskaya metro line, the Rizhsky railway station and the platforms of the second route of the Moscow Central Diameters (MTsD-2), the station Rizhskaya of the BCL is due to be linked in accordance with Yuri Kravtsov’s recall.

“The general construction readiness of the northeastern section of the Big Metro Ring is 86%. In addition to Rizhskaya, it includes the Sokolniki and Maryina Roshcha stations under construction, a connecting branch to the Nizhegorodskoye electric depot, as well as the already built Aviamotornaya, Lefortovo, Elektrozavodskaya stations, temporarily functioning as part of the Nekrasovskaya Line metro,” continued Yuri Kravtsov.

Including over 70km length and 31 stations 22 of which are already open to passengers, the construction of this Big Circle Line is the main project of the capital’s metro construction.