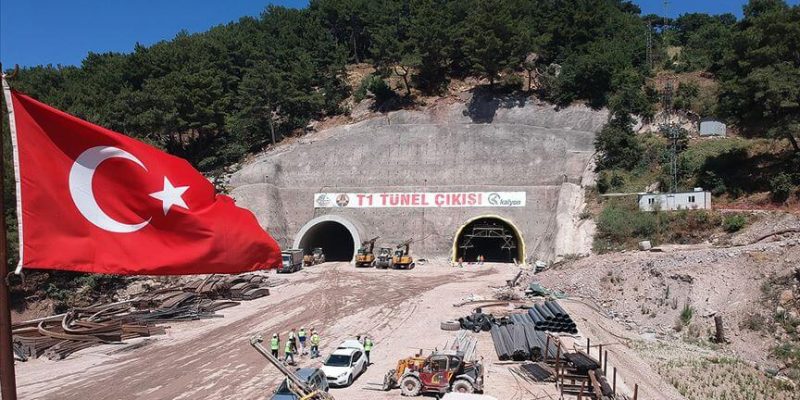 Locating within the scope of the Ayvacık-Küçükkuyu Road, the digging process have been completed and the light has been seen in the T-2 Tunnel and it will ensure the integrity of the divided road on the route connecting Çanakkale to Balıkesir and İzmir. The excavation works were concluded due to striking the final blow by Transport and Infrastructure Minister Adil Karaismailoğlu’s heavy machinery at the ceremony held on Tuesday, February 1.

Stating that one of the historical days was experienced 204 meters below the ground, Minister Karaismailoğlu stated: “The vehicle traffic increased with the revival of tourism in the region and the increase in trade. For a comfortable and safe journey, our construction works are continuing rapidly on the 10-kilometer Ayvacık-Küçükkuyu section of the north-south axis connecting Çanakkale to İzmir. We are constructing two double-tube tunnels with a total length of 5 meters, which contain tens of sharp bends. We passed the final concrete pavement level in the 710-meter T-1.700 Tunnel. We see the light today in our 1-meter T-4.017 Tunnel.”

He also added: “The Kaz Mountains ramps, which are located in the Ayvacık-Küçükkuyu section and can be passed in approximately 50 minutes, can be passed in as little as 5 minutes thanks to the tunnels, with the completion of the roads and tunnels, the safety of life and property in traffic will be ensured; will contribute to the tourism, trade and socio-economic development of the region; that the existing road will be shortened by 2,5 kilometers and reduced to 9,5 kilometers; thus, 72 million liras will be saved in one year, 8 million liras from time and 80 million liras from fuel; annual carbon emissions of 3 thousand 65 tons will be prevented.”

“This project, which includes tunnels and roads, is extremely important as it will also strengthen the logistics highway infrastructure of Çanakkale and İzmir transportation. Çanakkale-İzmir and Çanakkale-Balıkesir roads will reach the divided road standard. The difficulties experienced in Kaz Mountains due to heavy traffic especially in summer and seasonal conditions in winter will be eliminated. The traffic quality and safety on the route will also increase significantly. Another importance of putting this line into service is; With the 1915 Çanakkale Bridge, it will also respond to the traffic density that will increase with the intercontinental highway connection,” said Minister Karaismailoğlu, emphasizing the important contributions of the project to the region.

According to Minister Karaismailoğlu, significant steps have been taken that raise the transportation and communication capitals that contribute to the competitiveness of the country and increase the quality of life of the society.

He continued: “The project value of the still ongoing highway investments in Çanakkale is over 4 billion 287 million liras, and that by increasing the quality of the highways, the region’s production and they will continue to contribute to the development of trade, tourism and culture by increasing their employment.”