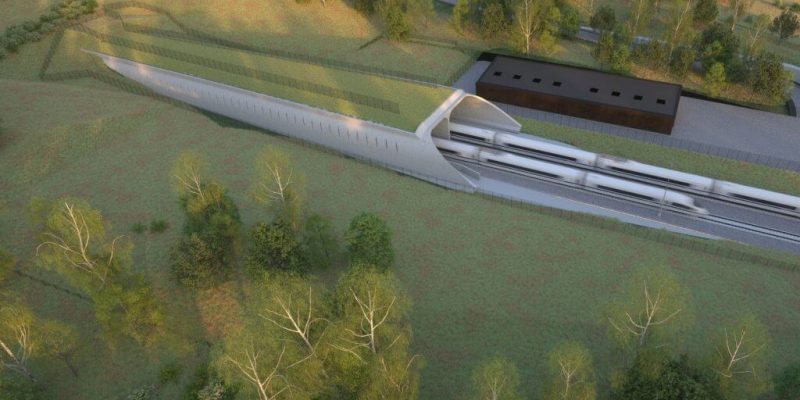 In order to construct tunnels with almost 7km length using an off-site modular approach, HS2 intends to benefit from lessons learned from the construction of French high-speed lines (‘TGV’).

The indicated techniques which have been further advanced by HS2’s main works contractor EKFB (Eiffage, Kier, Ferrovial, and BAM Nuttall), for the first time will be applied to three tunnels at Greatworth and Chipping Warden, Northamptonshire, and Wendover, Buckinghamshire.

According to this methodology that is a modern take on traditional cut-and-cover, instead of casting concrete or creating other structures in situ, the tunnel components are made in the factory and assembled on site. Five separate precast reinforced concrete elements including a central pier, two lateral piers, and two curved roof arches, are going to be slotted together on-site to create an M-shaped double-arched ring with separate northbound and southbound tunnels.

While the Greatworth tunnel with 2.4km length will be constructed using 5,400 factory-built elements in total, the requirement of these three tunnels will be a total of 13,290 elements which are due to be made by Stanton Precast in Derbyshire.

Following the assembling process, the tunnels will be backfilled and landscaped, dug spoil will be stored on-site for reuse later in the process. The new woodland areas above created by planting native trees and shrubs, including silver birch, oak, beech, and willow will be provided for every tunnel as well as the porous portals to decrease noise levels as trains enter and exit.

According to Andy Swift, EKFB Delivery Director: “The green tunnel design is a combination of innovation, international engineering expertise, and thoughtful landscaping for its local communities to enjoy. Once the tunnels have been built, the original earth removed from the cutting to make way for the tunnel, will be repositioned, creating a green space which will blend into the surrounding landscape.”

Considering the boosting process of the scheme’s environmental credentials, the modular construction comprises reduced amounts of concrete and steel. “Itis expected to be more than half the amount of carbon embedded in the structure and requires fewer people and equipment on-site, improving safety and reducing disruption for residents,” said HS2 Ltd.