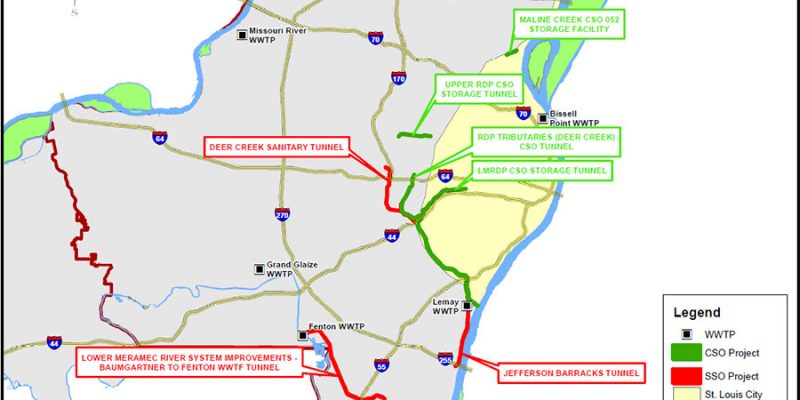 A second, refurbished Robbins TBM is to be obtained after the first system was stuck in a karst formation to complete the Jefferson Barracks CSO storage tunnel in St Louis. Jefferson Barracks in the St Louis Project Transparent program is the third of eight alignments that comprise the 32 mile (46km) network of deep CSO tunnels.

SAK has been the contractor for the five contracts awarded to date in the program and for the Maline Creek drive joint venture with Goodwin Brothers. The Jefferson Barracks push started in early 2017 with SAK.

The 3.5 mile x 11ft (5.5km x 3.6m) Jefferson Barracks alignment was planned as a hard rock drive with the original 11ft diameter Robbins TBM approved by the Metropolitan St Louis Sewer District for the project, as with all eight of the Project Clear drives (MSD). MSD stated in a written response to queries that drilling had stopped roughly 1.3 miles (2.2 km) into the drive with the TBM unable to dig into the geological conditions encountered. A proposal to purchase a 14ft (4.3m) diameter Robbins TBM, engineered and fitted for probing and pre-excavation grouting, to complete the drive, was approved at its December Board meeting by the MSD trustees.

The contractor suggested grouting along with spiling and steel sets, designed to stabilize the soil and according to conditions as actually observed, in order to counter the karstic soil conditions and allow excavations to reach the trapped machine. 127 ft of the recovery adit had been excavated as of January 2021, with work planned to proceed until mid-March 2021. Recovery of the TBM is expected to be completed by May 2020.

According to MSD, the new TBM is expected on site within the next six to nine months and will be assembled and fired via the recovery shaft and the adit after the trapped computer has been retrieved. It would then be serviced from the initial operating shaft to the proposed reception shaft by the current facilities, including the continuous muck hauling system. Originally due in April for completion. The Jefferson Barracks tunnel is currently provisionally planned to finish in May 2024.

A 2,640ft x 28ft i.d. Elsewhere in the Project Clear schedule, the construction of the Maline Creek facility, The concrete-lined cavern (800m x 8.5m) was fully completed in September 2020, and full operations are scheduled to proceed by the end of 2020.

4.3 mile x 19ft excavation i.d. In January 2020, when a Robbins TBM broke through the Haddington retrieval shaft, the Deer Creek sanitary tunnel was completed. As of early December 2020, 63% of the unreinforced cast-in-place secondary lining of 12in (30cm) has been completed with lining planned to proceed until March 2021. Final works and the dewatering pump station for the contact are planned to be complete by September 2022.

According to MSD, construction on the contracts for Maline Creek and Deer Creek continued through the Covid-19 pandemic, with the crisis not impacting the timetable or the project budget. Contractors and construction managers were expected to enforce protocols to restrict interaction with those on the construction site, where possible, by restricting the number of people in construction trailers, staggering shift start times, holding weekly meetings via video conference calls, wearing face masks and conforming to social distancing rules.

Construction of the 6.8 mile x 8ft i.d. looks to the future. After SAK Construction was accepted as the contractor in November 2020, the Lower Meramec drive is due to begin in January 2021, continuing its essential position in the Project Transparent Work Program. Owing to a longer-than-expected easement acquisition phase, the appointment was significantly delayed than originally planned, MSD said. The two drives will now take place simultaneously due to the delays on both Lower Meramec and Jefferson Barracks contracts. With the Upper River Des Plains deep storage tunnel completing the project as it opens in 2039, the procurement of three more contracts will proceed in the late 2020s and 2030s.

The Republic of Ireland is restricting non-essential building

The extension scheme for the Hampton Roads Bridge-Tunnel progresses