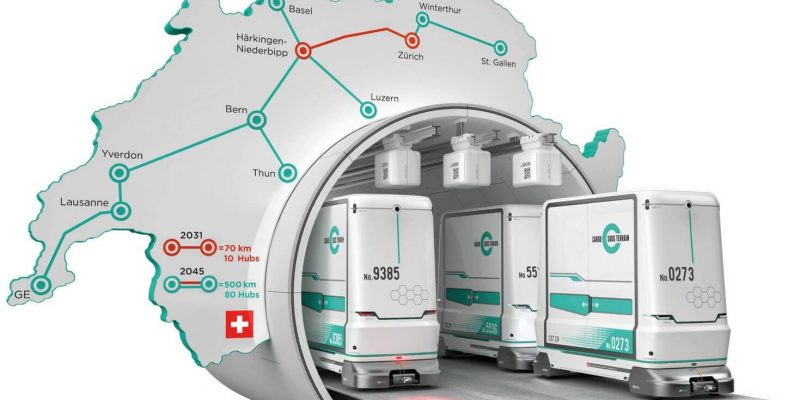 CST (Cargo sous terrain), the suggested system for transporting commodities within Switzerland by tunnels connecting production/distribution sites with urban centers has been given the go-ahead by the country’s parliament.

The effect of the wholly private-sector city logistics system to convey goods into the smart cities of the future is believed will decrease noise emissions by 50% and urban delivery traffic by up to 30%.

Commodities are going to be transported to and from hubs around the clock on electric, driverless vehicles running in three-track tunnels. Hubs are going to be linked to all surface and air transportation systems. The refrigeration-compatible vehicles are going to travel at about 30km/hr. and can automatically, pick up and deposit loads. An overhead track for smaller packages is fixed to the tunnel roof.

Cargo sous terrain is based on micro-distribution, where commodities are already bundled in the tunnel and can be delivered to end-users and sales outlets from the hubs. This prevents the need for every supplier to deliver goods individually.

The full network length between Lake Geneva and Lake Constance is planned for completion by 2045 and will also branch to Lucerne, Basel, and Thun. The total cost is measured to be about US$3.23bn and contains hubs, software, underground and overground vehicles.

Final Breakthrough has been Done on the Twin-Tubed Igatpuri Tunnel