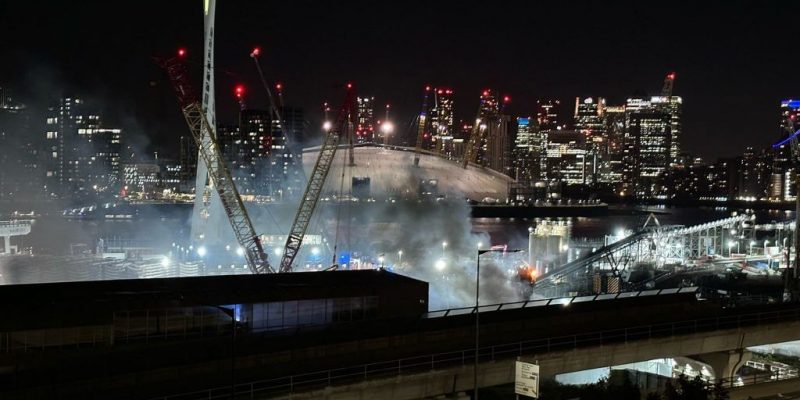 Tunnelling work on the Silvertown Tunnel has resumed.

Following last month’s fire at the project’s Newham site, six fire engines and 40 firefighters were requested to the site in London on Tuesday 27 September as per reports of a fire. Before the emergency services arrival, 25 people had been evacuated.

Now, Transport for London (TfL) has approved that, following necessary repairs to the conveyor system, tunnelling has restarted. Both the TBM and conveyor belt were safely resumed earlier this week.

The machine was launched in September by a JV between Bam Nuttall, Ferrovial Construction and SK Ecoplant (Riverlinx C JV). At the moment, the tunnel boring machine has tunneled over 50m underground, and already 24 concrete rings have been deployed as part of the tunnelling process.

A complete investigation by TfL, Riverlinx and its subcontractors into the cause of the fire and any lessons to be learned from the incident is carrying on. Fathi Tarada, a fire safety expert has emphasized on the importance of sharing learnings from the accident.

Back to the Silvertown Tunnel, it contains the construction of a 1.4km twin-bore road tunnel providing a new link between the A102 Blackwall Tunnel Approach on Greenwich Peninsula, and the Tidal Basin Roundabout junction on the A1020 Lower Lea Crossing/Silvertown Way.

Work is going on across the project, with sheet piling for the approach roads of the tunnel approach in Newham now underway. To make sure that any impact is kept under continuous review, noise and vibration monitors are located across the worksite. Recently, the rotation chamber in Greenwich has been built as well and concrete pours for the base of the chamber are underway.

At the same time, work to realign the road network in Greenwich to connect with the new tunnel started this week. Lane restrictions are in place on the A102 south of the Blackwall Tunnel, with one lane closed in either direction for the next two weeks, and the southbound A102 between the Blackwall Tunnel and the slip road off to Blackwall Lane is going to decrease from three lanes to two from 31 October until summer 2023.

The Riverlinx Joint Venture has successfully placed the tunnel eye in its final position and parts for the tunnel boring machine began to arrive on site in London shortly before Christmas.

Regardless of the efforts to use sustainable building methods, the tunnel has caused controversy as its inception with opponents says that its construction is going to lead to higher levels of pollution in the area. In this regard, in April last year, a group of 52 academics and campaigners called for an “emergency review” to be done to discover if the East London project is in line with the UK’s climate change goals.

Nevertheless, TfL and Riverlinx have vowed to continue the tunnel building as sustainably as possible. Keltbray has been hired by Riverlinx to run its environmental services contract to make sure that sustainable building techniques are being implemented onsite.