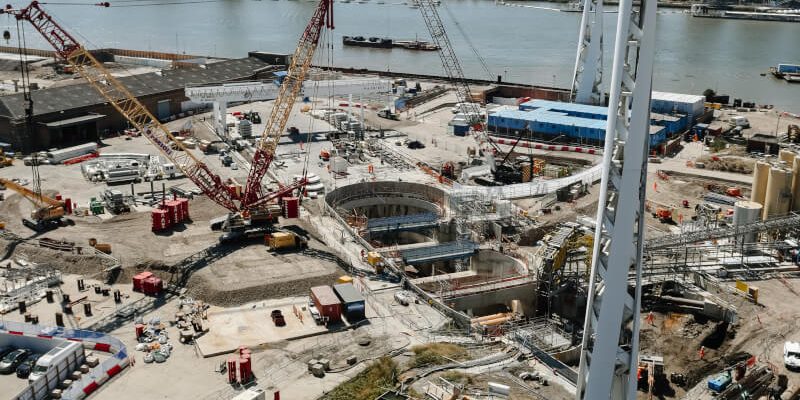 Following the accordance of a fire at the Silvertown Tunnel site in London last night, six fire engines and around 40 firefighters were called to the construction site at Silvertown, on the north side of the River Thames.

While there were no reports of any injuries, the damage of half of a conveyor belt by fire was announced and almost 25 people left the site before the Brigade arrived.

The Brigade’s 999 Control Officers received 15 calls to the blaze.

According to Station commander Daniel Capon, who was at the scene: “Access to the fire was challenging, with firefighters working to reach a sub-surface conveyor belt. Crews worked incredibly hard to bring the fire under control.”

The time of calling Brigade was 22:23 and the fire was under control by 00:08, whereas the cause of the fire is under investigation.

“We are aware that last night (27 September 2022) a small fire broke out by the conveyor belt system, which removes spoil from the launch chamber of the Silvertown Tunnel in Newham. All emergency procedures were followed and nobody was hurt as a result. Safety is our top priority and an urgent investigation with Riverlinx and its contractors is underway to fully understand the cause of the fire,” said a Transport for London (TfL) spokesperson.

Benefiting the largest diameter TBM ever employed in the UK, the tunneling process on the new Thames crossing is commenced earlier this month, while this road tunnel with 1.4km length is being constructed by Riverlinx consortium, a joint venture between Bam Nuttall, Ferrovial Construction and SK Ecoplant, through a design, build, finance, operate and maintain contract.

In accordance with TfL’s statement, in order to ensure safety standards remained high across all construction sites associated with the Silvertown Tunnel, it would pursue its close collaboration with Riverlinx.