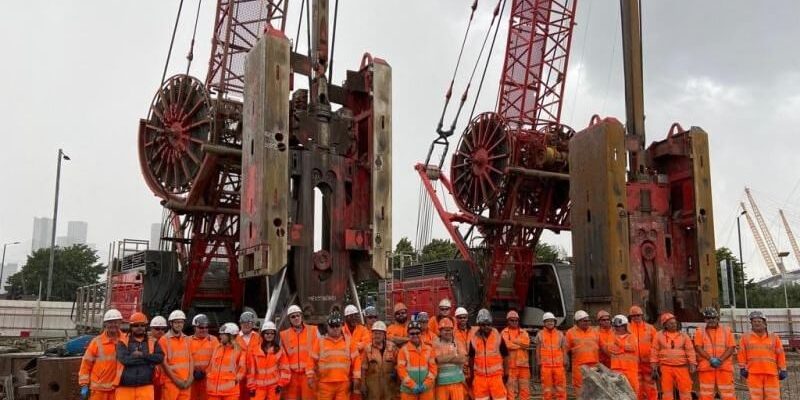 Recently the diaphragm walling for the Silvertown Tunnel scheme’s rotation chamber in Greenwich, London, has been completed by Bachy Soletanche.

While the assembling process of TBM for Transport for London’s (TfL’s) Silvertown Tunnel project is currently undergoing at the launch chamber site in Newham, the Riverlinx construction joint venture (CJV) announced in late June that the TBM’s assembly would continue throughout July, before final sign-off and the start of tunneling later in the summer.

The beginning site of TBM to commence excavation is the southbound tunnel towards Greenwich, where it is due to be turned almost 180 degrees in the rotation chamber before making its journey back to Silvertown to create the northbound tunnel, whereas the retrieval chamber in Newham is the location that the TBM will complete its journey and be disassembled.

According to Bachy Soletanche’s recent LinkedIn post, the completion of D-wall works on the rotation chamber marks a significant landmark for the infrastructure scheme. In total, it installed 23 panels totaling 6,580m3 of concrete and containing 800t of steel and glass fiber reinforced plastic.

Moreover, the contractor added that delivery of the remaining geotechnical elements on the scheme, which include secant walls, foundation piles and ground treatment works, will be continued by its team.

The Silvertown Tunnel will form a new 1.4km twin-bore road tunnel beneath the River Thames, following its completion in 2025.

Although in May 2018 TfL received permission for the tunnel and officially granted the Silvertown Tunnel design, build, financing, operations, and maintenance contract to the Riverlinx special purpose vehicle (SPV) towards the end of 2019, it followed a legal challenge that was filed by losing bidder Silver Thames Connect. TfL eventually reached an out-of-court financial settlement with the Silver Thames Connect group.

Also, in order to complete the design and construction works to deliver the tunnel, the Riverlinx CJV, comprising Bam Nuttall, Ferrovial Construction, and SK Ecoplant, concluded an agreement with TfL and Riverlinx SPV.