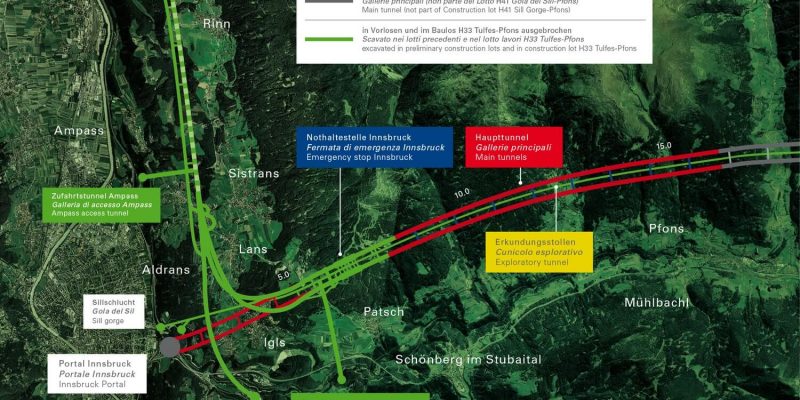 According to reports, in January 2022, works will start on one of the longest sections of the BBT (Brenner Base Tunnel) project in Austria.

Totally, the bid amount which has been offered by the consortium is 651 million euros. This lot is one of the greatest ones in the Austrian project area and it extends from the Sill Gorge through the Ahrental valley up to Pfons am Brenner, overall, 14.3 km. As it is stated, the construction works will be finished by the summer of 2028 and in 80 months.

According to the MEAT (Most economically advantageous tender) principle, and followed by a strict verification procedure, the tender was carried out at the European level. Meanwhile, the legitimate deadlines for a potential appeal have expired and the definitive award of the tender was feasible.

For ensuring the fastest progress possible in the whole project, the “Sill Gorge – Pfons” lot was extended southwards by three kilometers of main tunnel tubes, where it is going to be linked to the future construction lot H53 “Pfons-Brenner”.

The H41 “Sill Gorge – Pfons” construction lot is placed in the northern area of the BBT and between Tulfes (in the east), Innsbruck (in the north), and Pfons (in the south). In general, nearly 22.5 km of the key tunnel tubes and 38 cross passages – with a total length of nearly 2.3 km are going to be bored. Access to the new underground construction site will be granted via the Ahrental access tunnel, which already has been finished in the E41 “Ahrental” prospection lot.

The new H41 construction site represents the continuation of the works in the H33 “Tulfes-Pfons” lot, which were smoothly and successfully finished at the beginning of May 2021.