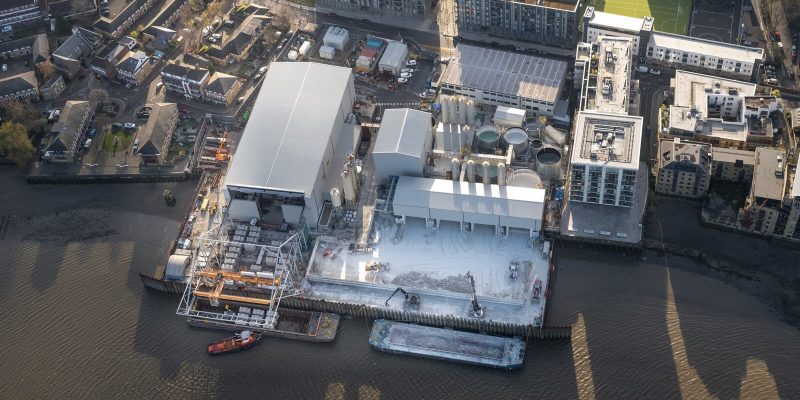 The use of the river for transport at Chambers Wharf, Tideway’s main drive site on the east section of London’s new super sewer, has avoided about 40,000 lorry journeys since tunneling started.

Selina, the TBM is currently tunneling east towards Stratford from Chambers Wharf, with all of the bored material from the tunnel being removed from the site by barge – taking up to 75 lorries off the road per barge. Also, tunnel segments to line the tunnel are being delivered by the site to the river, saving up to 48 lorries from attending the site.

Tideway is committed to use the River Thames for transportation during construction. Over 614,000 lorry journeys have been avoided across the project so far since construction started.

At the Chambers Wharf site alone the use of barges to remove tunnel spoil will eventually result in the removal of nearly 250,000 HGV movements from UK roads with an expected carbon reduction of 18,000 tons.

The senior project manager on the eastern section of the project, Mousa Khalifeh, stated: “It is always great to see good progress on sites, but to do so in an environmentally friendly way by utilizing the river makes it even more special.”

He also added: “The team on all the sites in East did a fantastic job and achieved all their planned milestones, and did so in a challenging working environment with the pandemic. We look forward to the works ahead in 2022 and marking the completion of all tunnel excavations on Tideway.”

Since tunneling began on the project 98 percent of material bored from the key tunnel has been transported by river from Tideway’s foreshore sites, dramatically decreasing emissions and cutting traffic for Londoners.

Despite the benefits of using the river for transport, five out of six sites on the eastern section of the project are now running primarily on HVO (Hydrotreated Vegetable Oil) fuel, produced from waste vegetable oil sources. Hydrotreated Vegetable Oil, which can make up to 92% less CO2e for each liter when compared with traditional diesel, is being explored for use on a number of our sites along the route.

An environmental advisor on the eastern section of the project, Anna Fish, mentioned: “The change to HVO fuel was an easy decision. Carbon emissions generated from fuel use in construction plant contributes a significant portion of the industry’s carbon footprint. This simple solution reduces several greenhouse gas emissions by using a sustainability-produced fuel from waste vegetable oil. Thanks to the enthusiasm shown by our teams and supply chain, it was straightforward to change and can be shared with other sites for further reductions”.

Tideway continues to trial different new technologies which are going to allow us to operate in a sustainable way and deliver a positive, lasting legacy for London.

Bridges or Tunnels could Replace Ferries to Mull and between Barra, Harris and the Uists