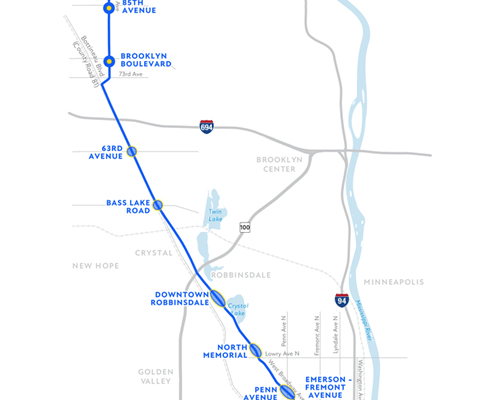 The recommended route for the Metro Blue Line light rail extension, was published by Minneapolis Metropolitan Council and Hennepin County after two years of stakeholder consultation and technical analysis.

Following the years of unsuccessful discussions with BNSF Railway, the plan of sharing an existing railway corridor by this line as well as colocation plans was abandoned by the project promoters in 2020.

Public comments of the recommended route are invited by May 18. Once the route is officially adopted by the council, work on the design and environmental review will get underway. The opening is planned for 2028.

According to Metropolitan Council Chair Charlie Zelle’s statement on 18 April: “The extension is an essential part of our region’s transit infrastructure. The project team had done an admirable job in balancing the feedback we have heard from the community, engineering challenges, and route analysis in making this recommendation. The route is not without its challenges, but I sincerely believe they are not insurmountable.”

“The communities served by the proposed route are transit-reliant and racially diverse and have experienced historical disinvestment,” said Irene Fernando, Hennepin County District 2 Commissioner and chair of the Regional Railroad Authority.

She also added: “The proposed route would connect students to education, workers to jobs, patients to healthcare, and families to resources, while connecting the corridor to the broader transit network. This project will ignite economic development for small businesses, resulting in more affordable housing options, increasing access to educational opportunities, and building wealth for working families.