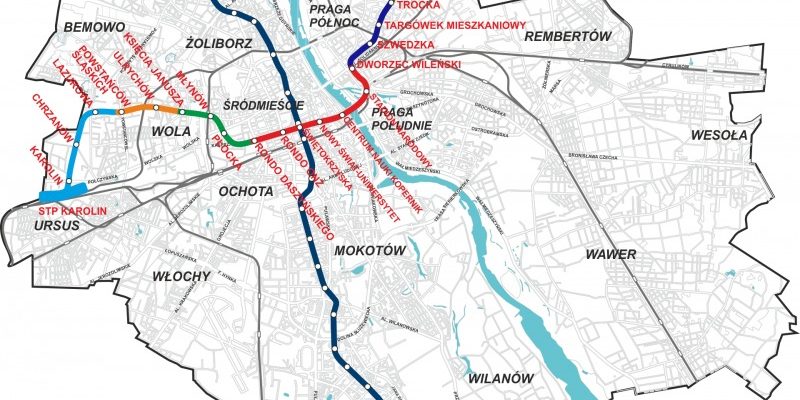 By Tunneling admin
Share
The TBM shield operation for building the tunnels for the Warsaw metro line 2 had hit a range of approximately between 2239 to 2908 m for TBM Maria and 921 to 2878 m for TBM Anna in the East section by 9 October 2020; On the West section, connecting Wola to Bemowo station, TBM Elisabetta completed 214 to1367m, and its sister machine (TBM Krystyna), reached 870 to 1369m.
Since the beginning of the project, TBM Maria is now 1320 m away from Kondratowicza C20 heading toward C19 Zacisze station within the next 24 hours. With more than 1500 lining rings being already installed by her.
Simultaneously, 630 m of the tunnel from the station C05 Powstancow Slaskich is driven by TBM Krystyn, leading to installation/positioning of nearly 500 circles. TBM Krystyna break through the Powstancow Slaskich station and completed the shortest tunnel (137 m) of the Warsaw Metro Line 2 in August.
Now by finishing her drive under the viaduct of ul, Górczewska, Bemowo and Wola areas are connected via the subway tunnel.
Please visit  for more information.

A tunnel as an Irish Sea fixed link