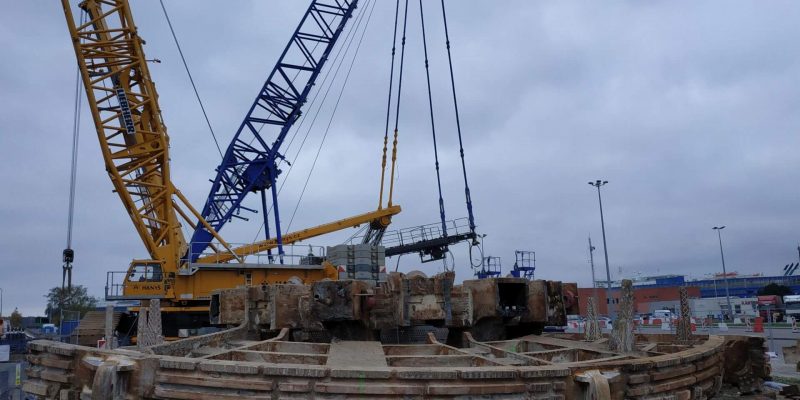 The Swinoujscie tunnel, which is a 1,483.8 m long single tube tunnel and is going to have a 3.5 m wide lane for each direction with emergency lanes every 2 m wide running beneath the Swina river, is undergoing its preparatory works phase for the construction of emergency exits.

The tunnel is due to have a roof for ventilation and a slab for road placing, while there will be an evacuation road and access to it from the emergency exits below the road.

In order to dig the emergency exits, reducing the risk of instability and of groundwater flooding, the ground freezing method will be used. The estimated time duration for the entire operation is almost five months. The brine solution cooled down to minus 35 degrees Celsius, will circulate in a closed piping system and transfer heat from the ground to the installation and then to the atmosphere. The average temperature of the frozen soil will be minus 10 degrees for sand and clay, minus 8 for chalk.

Although the assembly process of the steel structure at the first emergency exit’s location was completed the previous week, drilling and bonding of anchors below the brackets for prefabricated elements are yet in progress inside the tunnel. Additionally, the separating process of TBM technological pipelines, which were used to transport drilling fluid and spoil, is currently undergoing both inside and outside the tunnel on the Uznam island.

Besides sealing the diaphragm walls in the TBM launching chamber, the sealing process of the access ramp to the tunnel and dismantling of TBM Wyspiarka on the other side of the Swina river, on Wolin Island is still in progress. Disassembled elements are being transported to storage areas.

Providing the over EUR 191.72 million (PLN900 million) cost of this project is divided and the European Union is responsible for almost EUR 165,24 million (PLN 775.7 million) (85 %) of it, while the rest of the investment comes from the Swinoujscie City Commune budget.

The PORR / Gülermak consortium and SWECO / Lafrentz are respectively the project’s contractor and supervisor. While it is three years that this contract has been signed with the contractor, two years since the actual start of construction is passing and the remained time for completion of the project is a year.

For further information please watch the video below and also click here and here.