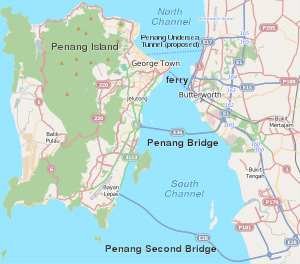 Due to presenting the publication of the feasibility study, the possibility of implementing the Penang subsea tunnel has moved closer.

In 2013 the tunnel project in the North Channel was granted to Consortium Zenith BUCG, while the draft feasibility study report has been undergoing since 2014 and finally it has been rendered to the state executive council.

According to chief minister Chow Kon Yeow’s statement in a press conference: “The study showed the project should go ahead, but subject to compliance regulations.”

In the next step state government is going to request written reviews from the Penang Port Commission and Penang Port Sdn Bhd before making its decision. Although Chow said that a third bridge link had also not been ruled out, Penang island and the mainland are already connected by two bridges and a ferry crossing.

One of the advantages of the bided 7.2km-long tunnel is to link Persiaran Gurney to Bagan Ajam in Seberang Prai, whereas it is part of the Penang Transport Master Plan comprising a seabed tunnel connecting the island to the mainland, highways, light rail transport, monorail, and a comprehensive network of bus routes on the island and mainland.

Consultation for the A303 Stonehenge DCO (Development Consent Order)