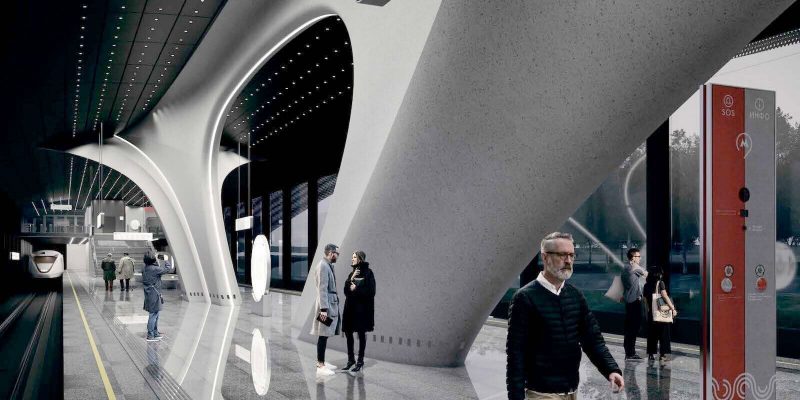 With attention to Andrey Bochkarev’s statement, who is Deputy Mayor of Moscow in the Moscow Government for Urban Development Policy and Construction, around 30 percent of the Novomoskovskaya station under construction on the Sokolnicheskaya metro line is ready.

While construction of the station complex is undergoing, the foundation pits have been completed and preparing the domain and deleting the utilities in the area of the future traffic intersection on the Solntsevo – Butovo – Varshavskoye highway section from the Stolbovo transport interchange center to Polyany street is close to completion. This is necessary for the smooth extension of the red metro line.

In accordance with Anna Merkulova, general director of the Mosproekt-3 group of companies, comment, in order to maintain the architectural appearance of the station complex, the assignment of additional equipment requires non-standard engineering solutions from the designers.

She also added: “We have abandoned the classic ventilation chamber inside the station and placed all the overall equipment on the roof of the station complex. It was possible to connect the branched engineering systems with each other and with the shell structure thanks to the use of BIM technologies. Even at the design stage, information modeling made it possible to detect and correct conflict points, as well as organically combine communications with the architecture of the object.”

Due to clamping the station complex, which is placed along the Solntsevo – Butovo – Varshavskoe highway, on both sides by overpasses, the experts were able to decrease the total area of Novomoskovskaya and thus fit it into the cramped conditions of the surrounding buildings.

The advantages of Novomoskovskaya station, which is being constructed in the settlement of Sosenskoye, will be improving transport services for inhabitants of the Novomoskovsk district, the Yuzhnoye Butovo district, and the new quarters of Kommunarka.

SICE SA from Madrid has Secured the EUR 282,560 Contract