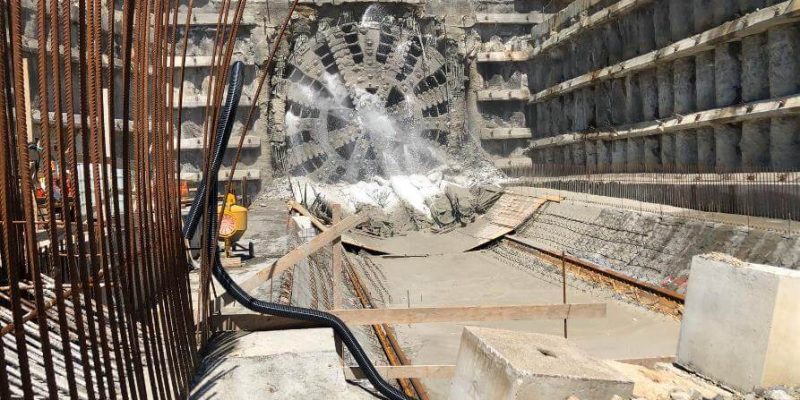 Two emphasized aspects of constructing this tunnel by MAPEI are:

Significant helps of MAPEI UTT’s technical was in the following steps:

MAPEI provided products for the mix design of precast concrete used to make the tunnel segments – dimensions (55 cm thick and 2.2 m long) were particularly high precisely because of the excavation diameter of the tunnel itself. Dynamon NRG1015SC and Dynamon NRG1037, super fluidifying additives were specifically formulated for this application, and Mapeform W60, a universal formwork release agent, was also used.

During the excavation of about 8 km of tunnel, Polyfoamer ECO/100, a foaming agent based on surfactants in combination with a natural polymer, was used to condition the soil at the shield. Polyfoamer ECO/100 differs from traditional foaming agents in that it has a very low environmental impact on water and excavated soil.

The use of Polyfoamer ECO/100 throughout the tunnel allowed the company both to advance the excavation quickly and safely and to minimize the environmental impact on the soil and consequently reduce the time required to store it on-site before transporting it to its destination. About 1.5 million cubic meters of soil were excavated and conditioned with Polyfoamer ECO/100.

Restoration of the concrete in the segments

The defects in the concrete of the segments were repaired using MAPEI cementitious mortars and leveling compounds from the Mapefer, Mapegrout, and Planitop ranges. In addition, Resfoam 1KM Flex single-component polyurethane resin was used for secondary injection on the back of the segments in the event of water infiltration.

Grand Paris Express: Completing the Tunneling Process in Lines 16 and 17