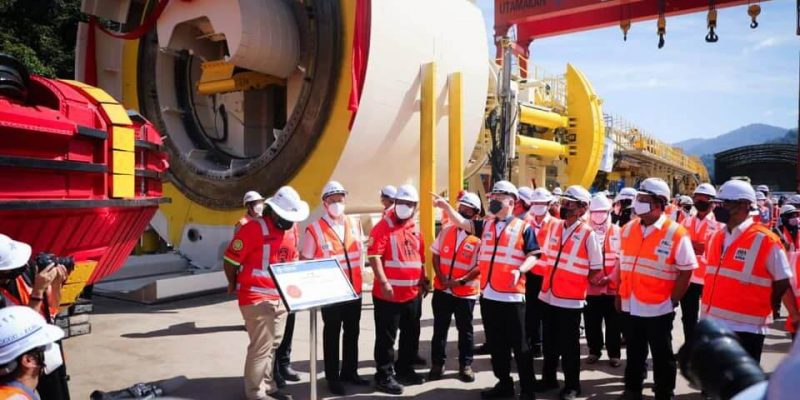 Transport Minister Datuk Seri Dr. Wee Ka Siong mentioned that the two TBMs (tunnel boring machines) which are going to be used to mine the twin-bore Genting Tunnel portion of the ECRL (East Coast Rail Link) are the greatest of its kind in South-East Asia.

DR Wee asserted that the machine cutter heads from China are equipped with four torque cylinders and weigh almost 900 tons each. They are 25m long and have a boring diameter of about nine meters.

He claimed that the total weight of the machine cutter head with a gantry support structure (which contains control centers and machines) is 1,600 tons and 266m long.

After visiting the construction site near Bentong, he said: “This makes the TBM machine the biggest in South-East Asia for rail and excavation works in Malaysia,” “This is a record that we created in Malaysia.”

The machines were built by the CCCC (China Communications Constructions Company) Tianhe Machinery and Equipment Manufacturing Co Ltd in Shanghai, China and they were custom made for use in hard rock conditions.

The machine was moved disassembled in 286 packages from Shanghai Port and reached Port Klang in July 2021.

On this visit, Dr. Wee noted that 131m had been excavated by local and CCCC workers and another 50m had to be bored before the machines could be deployed.

He added: “We are expecting that in March this year, the TBM will enter the tunnels before it officially begins excavating.”

Dr. Wee stated that the machine has a maximum excavating capacity of 700m per month at the 16.39km twin-bore Genting Tunnel between Bentong and Gombak.

He also described that the machine’s three key tasks were tunnel boring, removing excavation waste to the surface, and installing concrete walls in the tunnel.

“These three functions should take up to three years to complete,” mentioned Dr Wee.

Dr. Wee declared boring the Genting Tunnel would be a difficult and challenging feat but CCCC officials were equipped with the proper knowledge to handle the tunnel boring machine.

“They have vast experience in handling TBM work. For them, it isn’t as difficult as other jobs they have had elsewhere,” he mentioned, adding that he believed this would be the longest rail tunnel in South-East Asia.

He also added that the visit by Dr. Wee’s and Liow’s came at the right time as the machine were 85% assembled.

“MRL is optimistic that the high-technology TBM will be able to take on geological and engineering challenges excavating across the Titiwangsa mountain range.

Zuki continued that the Genting ECRL Tunnel would be the first time a tunnel boring machine would be used for digging here, instead of blasting and drilling methods used before.

He also added: “MRL is confident that ECRL staff members have the experience to handle the TBM to build the longest rail tunnel in Malaysia.”

The 665km-long ECRL, which is planned for completion by December 2026, will traverse the East coast states of Kelantan, Terengganu, and Pahang, and connect the Klang Valley in the process.