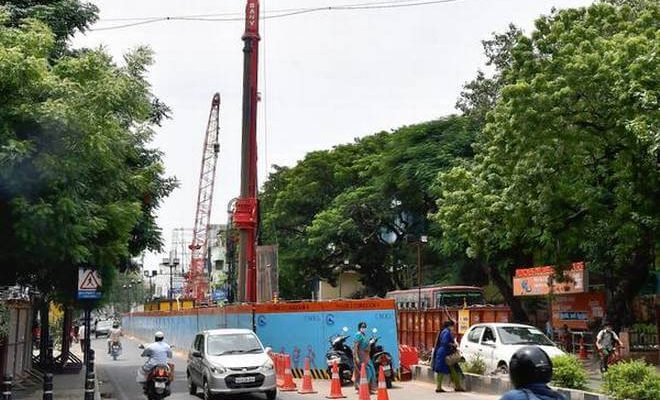 In a series of contracts being awarded to move ahead with full-fledged construction of Chennai Metro Rail’s phase II project, ITD Cementation will get two contracts for constructing underground stretches from Kodambakkam to Light House as they had emerged as the lowest bidder. The company would construct tunnels and stations in Boat Club, Nandanam, Panagal Park, Kodambakkam, Kodambakkam Flyover, Light House, Kutchery Road, Alwarpet, and Bharathidasan Road.

For the Second Phase project’s three corridors, construction work has been on for many weeks in a section of Corridor 3 from Poonamallee to Light House.

This corridor had been designed in such a way that while half of it would be lifted, the other half will be an underground stretch.

Currently, a JV between KEC International had Hindustan Construction Company and been doing construction of an elevated viaduct from Poonamallee to Porur. L&T had started this work between Power House and Porur. After Power House, the viaduct dips and runs underground till Light House.

As the sources in Chennai Metro Rail Ltd. (CMRL) reported, two tenders were floated for building the stations and tunnels between Light House and Bharathidasan Road and from Boat Club to Kodambakkam.

An official stated: “This firm is the lowest bidder for both contracts. The firm will be given some time to set up site office and start work. It will have to build a tunnel for nearly 10 km here and also build nine stations. First, it will build a diaphragm wall next year and then continue with the tunneling work.”

In the other two corridors of the project’s second phase — Madhavaram to SIPCOT and Madhavaram to Shollinganallur — underground work had been started from Madhavaram to Taramani though work for the whole stretch has not been allotted yet. As the sources have said, it would take several months to finish the tendering process.

Implenia to Construct District Heating Tunnel Below the Elbe