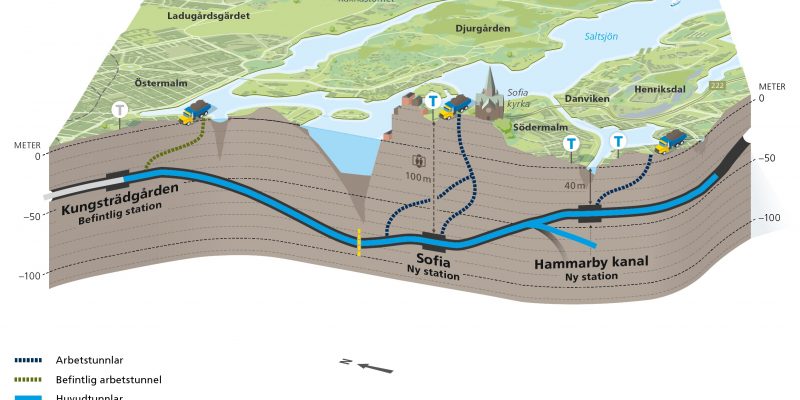 Implenia, the Swiss construction company, has signed a contract with Stockholm Region for building a new metro station and related tunnels at Sofia in the Swedish capital. The project will cost nearly US$85m.

Placed about 100m under the ground and with eight high-speed elevators moving commuters quickly to and from the platforms in an estimated 30 seconds, the station will be one of the deepest in the globe.

It is going to form part of Stockholm’s Blue underground line which is being expanded from the centrally-located Kungsträdgården, to Nacka in the southeast of the capital, and to Hammarby Sjöstad in the south.

Besides the suggested subway station, Implenia is going to construct elevator shafts, one parallel service tunnel and two single-track tunnels for the subway. They are doing to use drill and blast to build overall 4.6km tunnels.

Implenia’s contract primarily contains planning of concrete work and implementation work. The total planning will be done by the client. Construction work is offered to run from the 3rd quarter of 2021 to the 4th quarter of 2025.

The contract is a maintenance of the London Viaduct 1.5km access tunnel which Implenia received in 2019 by Stockholm Region. Currently, the work on this is in progress and is paving the way for the suggested main tunnels at Sofia.

On the Brenner Base Tunnel, set a TBM advance record.