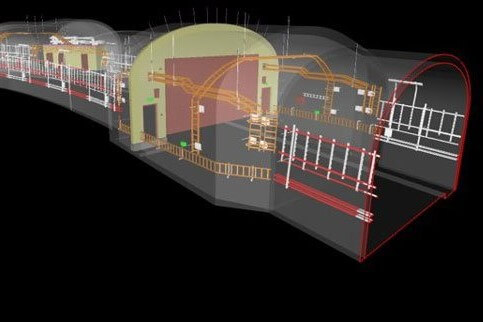 In order to construct a tunnel linking the existing metro with an expanded metro depot in Högdalen, south Stockholm, the Stockholm regional council, Region Stockholm, has granted Implenia a SEK1bn (£81.6M) contract.

The reason for developing the Högdalen depot is to accommodate the new trains for the new Stockholm metro routes.

Implenia is due to construct a new concrete tunnel and trough to link the depot with the available metro track Farstagrenen which runs among Skärmbrink metro station and Farsta Strand terminus on the green line.

Consisting of almost 2km of track tunnel and a 500m long underground parking area for trains, this rock tunnel is being built in a densely populated urban area and close to other railway tracks using blasting technology, while Implenia is going to equip the tunnel with the required installations for electrical and telecommunication systems, control systems, ventilation, and fire sprinklers.

According to Implenia executive committee member and head division civil engineer Christian Späth: “We are very proud of being chosen for this large, complex and multidisciplinary infrastructure project, fully in line with our strategy.”

He added: “We are looking forward to a fruitful collaboration on the project and are glad to bring in our longstanding tunneling expertise as well as our skills in project management and sustainability.”

The planning and building process of the tunnel will be in accordance with Ceequal sustainability standards, one of the client’s requirements, whereas the planning and realization will be based on a BIM model (building information modeling) and delivered using the lean construction method.

Additionally, the contract with SEK1bn (£85M) value has been awarded to Implenia by Region Stockholm in May 2021, to build the Swedish capital’s new “Sofia” metro station and associated tunnels.