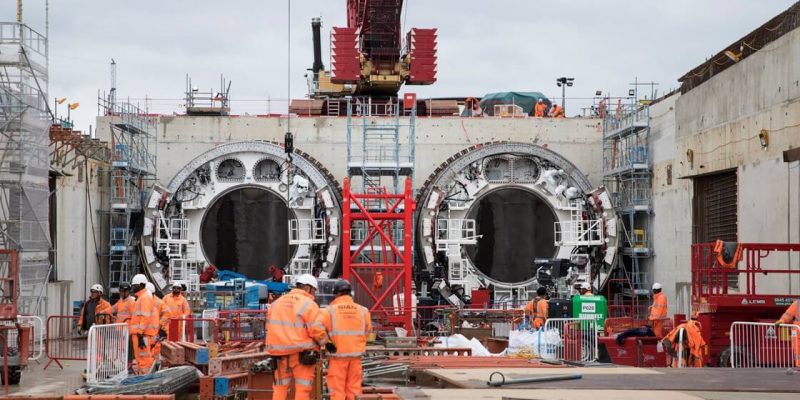 The launch of HS2’s giant TBM which has been set off on its five-mile journey from West Ruislip to Greenford on 6th October, has provoked new training and employment opportunities for residents in seven London boroughs.

Skanska Costain STRABAG (SCS) which is HS2’s construction partner, is working in partnership with Danny Sullivan Group, Camden Council and TheForge@ParkRoyal (part of the Old Oak and Park Royal Development Corporation) to deliver a bespoke training and work placement program especially for residents who live in Brent, Camden, Ealing, Hammersmith and Fulham, Hillingdon, Kensington and Chelsea and Westminster.

As reported, the three-week training program, delivered with West London College and United Colleges Group, begins on 24th October and is going to be followed by a four-week paid work placement, to allow candidates to get a feel for what it’s like to work in construction, and as part of the team operating the giant 2,000-ton machines.

SCS will launch five more TBMs during its construction program. It will also create a total of 26 miles of tunnel under the capital, ready to transport HS2’s state of the art British-built bullet-style trains into the terminus station at Euston.

HS2’s Skills Manager for Greater London, Ambrose Quashie, stated: “We’re teaming up with some brilliant partners, as we know they are well placed to ensure that local people, who are most in need, benefit from these unique training and employment opportunities on HS2.”

He continued: “Tunnelling is a highly-skilled career for life, and this is a fantastic opportunity to join the team tasked with constructing some of the most challenging sections of the whole HS2 route.”

The training program is going to make candidates ready for their four-week paid work placement. They are going to obtain the vital construction and health and safety accreditation they require to start working alongside and learning from some of the most experienced engineers in the industry.

Danny Sullivan Group which is Skanska Costain STRABAG’s contractor, is said to be searching for standout candidates via the program and will invest in providing tunnelling operative apprenticeships to those eager to earn, learn and progress into this specialist engineering role.

Skills Employment and Education Manager at Skanska Costain STRABAG JV, Frankie Jones pointed: “HS2 is a project for future generations, and this extends to inspiring the next generation of the future stars in our industry. It is great to be able to offer a unique opportunity for people to get involved in tunnelling, whilst learning about our program of construction and helping us construct the railway.”

Camden Council and TheForge@ParkRoyal is going to play an essential role in supporting local residents who are out of work, and live in one for the seven qualifying boroughs, with their job applications. This forms part of an ongoing ‘job brokerage’ partnership with HS2, which is designed to make sure that local people benefit from the thousands of employment opportunities HS2’s construction is generating.

Manager of TheForge@ParkRoyal, Billy Seago mentioned: “We’re excited to join HS2, SCS and wider partners to deliver this important training opportunity. The training program offers a fantastic opportunity for residents to gain skills to be an important part of a ground-breaking project like HS2, while also being paid.”

He also added: “TheForge @ParkRoyal has already placed more than 150 west Londoners into training and employment and we encourage residents to consider this opportunity and get in touch with us to find out more.”

Saint-Denis Pleyel Update: the Rails of Line 14 are Laid!