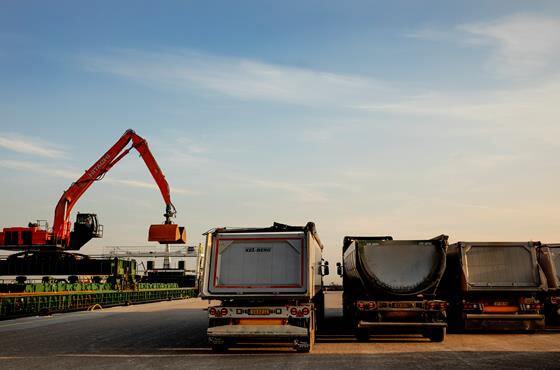 Locating on the island of Lolland in Denmark, the first cargo vessel has reached the Fehmarnbelt tunnel’s construction site in Rødbyhavn.

Including almost 7,000 tons of granite aggregate from Norway, which is due to be used for access roads at the construction site, MV Aasvik docked at the working harbor. This site has been constructed adjacent to the large tunnel factory, which will be the location of producing the elements for the world’s longest immersed tunnel.

Due to shipping the tunnel elements out from the port and receiving millions of tons of building materials required at the construction site, the 500,000m2 work harbor is going to become one of the busiest in Denmark and will play a key role in the construction.

Delivering the materials directly to the factory will remove thousands of HGV journeys from the roads.

According to Jens Ole Kaslund, technical director at state-owned developer Femern: “It’s a real step forwards that we can now begin to use the working harbor. The harbor is absolutely crucial for the logistics behind the construction of the Fehmarnbelt tunnel. It will ensure a robust supply route directly to the factory and protect the local environment from heavy traffic.”

The amount of received building materials such as sand, gravel, cement, and rebar will be up to 70,000 tons per week, while all six production lines at the tunnel factory are in operation. The harbor has both eastern and western docking facilities and is more than twice as large as the existing facilities in Rødbyhavnm, making it one of the largest harbors in Denmark.

While at the tunnel factory a trial cast of part of a tunnel element is undergoing.

As the current largest construction project in northern Europe, the Fehmarnbelt project will connect Germany and Denmark via an 18km immersed tube tunnel under the Baltic Sea. The 79 217m-long hollow, reinforced concrete elements, and 10 special elements will cover the required elements of this project, whereas it will be the world’s longest immersed tube tunnel and the longest combined road and rail tunnel underwater, due to inauguration in 2029.