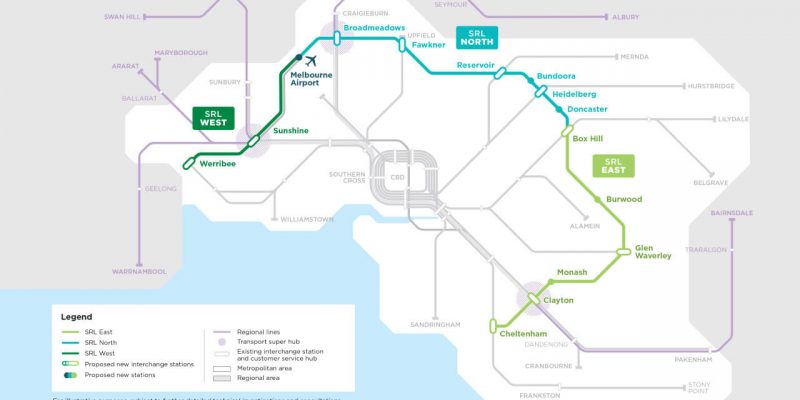 As the longest tunneling package in Victoria’s history, construction of the eastern section of Melbourne’s Suburban Rail Loop (SRL) has faced interest.

Including the delivery of almost 16km of twin tunnels between Cheltenham and Glen Waverley, the package will also comprise of the second package for tunnels from Glen Waverley to Box Hill and will complete the SRL East rail corridor.

While up to 10 tunnel TBMs could be used for SRL East in the first pack, the large number of TBMs are due to speed up the tunneling process, with launching sites planned for three locations: Monash, Heatherton, and Burwood.

By paving the way for major works, the commencing date of construction works will be the next few weeks including the preparation of the TBM launch sites, whereas the tunneling is expected to start in 2026.

The contents of this package will be safety cross-passages between the tunnels, station boxes at Clayton and Monash, and tunnel entrances and exits at the stabling facility. Cross-passages will be excavated via the constructed tunnels using small or remote-controlled excavators.

Considering Melbourne’s topography some engineering challenges, with highly variable ground conditions and groundwater levels along the bided route are going to be presented. For example, South of Monash, conditions are predominantly clay and sandy, and to the north, mostly sedimentary rock, while slurry and EPB TBMs may be suitable for different sections.

Building SRL East as twin tunnels reduces the volume of rock and soil needed to be removed. Much of the spoil will be reused for rehabilitating quarries or on other construction projects.

With the total length of 26km of twin tunnels, the shortest TBM drive of SRL East is slated to be the 2.6km between Monash and Clayton, while the longest section is 6km between Burwood and Glen Waverley.

The SRL is a 90km rail line that will link every major rail line from the Frankston Line to the Werribee Line via Melbourne Airport.