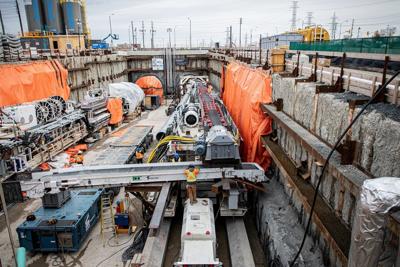 The Renny TBM, which is the first TBM that commenced the tunneling process between Renforth Drive and Scarlett Road for the contractor West End Connectors Construction (WECC) has excavated1.9 km during the last six months, whereas digging process of 1.1 km of the Eglinton Crosstown project was up to Rexy, the second TBM, since late July. Removing of the soil and rock out of the tunnels is done through conveyor belts and transferred to the muck pit.

Following completion of the mission these two TBMs, they are due to dig more than 6 km of tunnel among Renforth Drive and just west of Scarlett Road – a significant section of the 9.2-km route.

Also without any need to transfers, quick and easy travel from the east end of Toronto, through the heart of the city and into Mississauga will be enable using the Eglinton Crosstown West Extension.

In order to creating a watertight wall around the area of future subway stations and emergency exit buildings, construction process of headwalls commenced in the previous spring and the underground support structures made up of piles drilled into the ground using large drill rigs, which are usually over 33 m high.

Considering that the headwalls must be built before the TBMs arrive at each location, their construction is moving from west to east along the alignment ahead of the arrival of the TBMs, while the required time for building of each headwall is around four to eight months.

Work for the emergency exit building at Wincott Drive also began this summer and will last until next spring.

The expected date for commencing the Headwall work at Islington is later this fall and it will last until the spring of 2023, while headwall construction at Royal York is slated to begin in the winter.

In order to dismantling and removing Renny and Rexy from the ground once they reached to their destination just west of Scarlett Avenue, an extraction shaft is due to be used, whereas this shaft is also the portal for where the trains will transition between the tunnel and the elevated guideway. Shifting Eglinton Avenue West 10 meters (or 33 feet) south, in the current winter construction of the extraction shaft will begin this winter.

The Chennai Metro Phase II Train Contract has been Granted