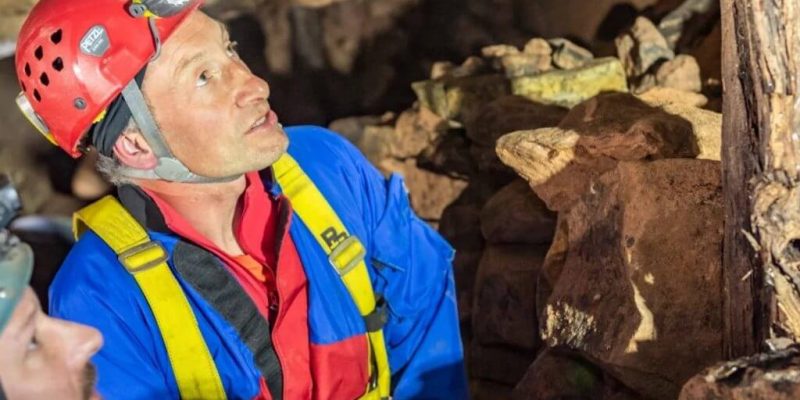 Following the discovery of a rare Napoleonic-era cobalt mine in rural Cheshire, as the National Trust stated, the discovery at Alderley Edge of the abandoned mine has presented archaeologists a glimpse into the working conditions of a mine as it was during the Napoleonic Wars, with personal objects, equipment, and inscriptions the workers left behind.

Considering that there has been mining activity at Alderley Edge since pre-historic time, similar mines are already known in this area and these mines, which are owned by the National Trust, have been leased since the 1970s to the Derbyshire Caving Club.

According to the National Trust, the estimated time for an abundance of the latest mine to be discovered is around 1810, and rare to find one in such pristine condition. Leather shoes, clay pipes, a metal button from a jacket, along with inscriptions written in candle soot, and mine machinery, are the artifacts found.

Among the larger abandoned items was a windlass, a piece of equipment used to shift large weights or quantities of raw materials. This is the first time such a piece has been uncovered at Alderley Edge.

Being used widely specifically for the blue coloring in pottery and glass, cobalt mining was short-lived in England because imports from the Continent were more plentiful. These had halted over the Napoleonic Wars from 1803 to 1815, caused to the search for sources closer to home.

At this time, the land at Alderley Edge was owned by Sir John Thomas Stanley. He anticipated a lucrative cobalt market, so in 1808 he leased out the rights to the extraction of cobalt ore in a network of his mines, but these were abandoned in 1817 when imports resumed.

According to Ed Coghlan of the Derbyshire Caving Club: “In the time the club has been active here, we have explored a number of disused historic mines and made some significant discoveries. But many mines have been filled in with rubble over the years or with sand washed into them by heavy rainfalls or they have been accessible in some form since they were abandoned, so anything of interest had been removed.”

He continued: “To find a mine in pristine condition, together with such personal objects and inscriptions, is rare. It is a compelling window into the past and to the last day when the mine workers stopped their activities.”

In order to use state-of-the-art technology to create an immersive fly-through of the cobalt mine which is now being shared online, the National Trust has worked with a specialist team from Christians Survey & Inspection Solutions to give everyone a chance to see inside virtually.

National Trust archaeologist said: “This discovery is helping us understand a less well-known chapter in the story of mining at Alderley Edge, which has been explored and exploited for 4,000 years.”

“We are passionate about giving people the chance to explore our industrial heritage and the Caving Club conducts tours of some of the more accessible mines that have been discovered at Alderley Edge. But sometimes locations with impractical access mean we need to find other ways to bring the place to life for visitors. Virtual access is a great way anyone can navigate their way around the mine from the comfort of their armchair and imagine themselves in the boots of the men who worked there. The objects found in the mine have been photographed and cataloged and left where they were found, to remain in the underground conditions which have preserved them. It leaves the mine as a time capsule, protecting a place that was once a hive of activity for future generations to explore and enjoy,” added Jamie Lund.