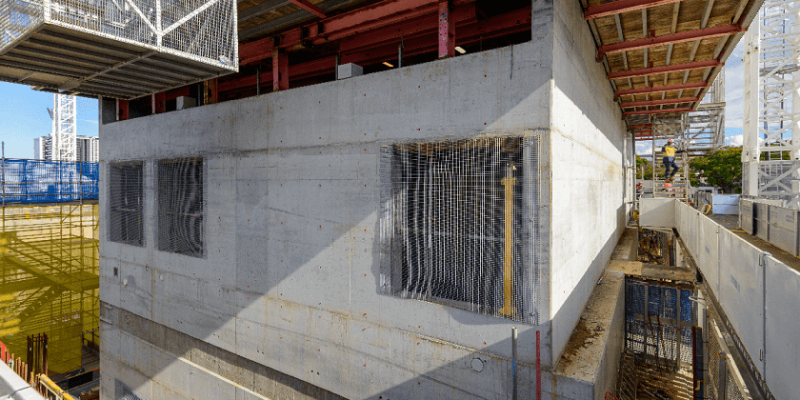 In May 2022, the final delivery of railway tracks attained at the Northern Tunnel Portal site. The whole of the 9,570 m of railway tracks that have been delivered to the site, are going to be installed in the northern section of the Cross River Rail tunnels over the coming months.

While the digging and construction process of the Northern Tunnel Portal structure is undergoing, the gantry crane is now removed and the final section of the roof will be installed in June 2022.

As the deepest hole ever excavated in Brisbane, at the Albert Street site the 50-m-deep station box has been fully dug, where almost 47,000 m3 of spoil was removed, 340 rock anchors, over 1,500 bolts and 4,500 m3 of shotcrete were also used. In order to ensure that the tunneling was stable, due to the significant depth, 19 massive steel propping beams each weighing about 50 tons were used.

The concrete lining works in the station’s caverns at the Woolloongabba site have been completed, whereas over 20,000 t of concrete was benefited to line the caverns over the past seven months. Crews will soon begin fitting out the station’s mezzanine level, while escalators and lifts are due to commence being installed later this year. Laying the first section of track underground among Woolloongabba and Albert Street sites, the tunnels are also continuing to take shape.

Please click here for tunnelingworld archive and also for more details on this project visit their website.