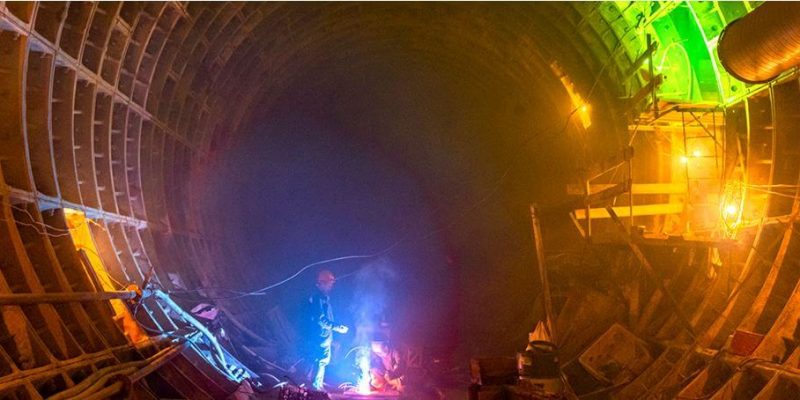 According to Andrey Bochkarev, Deputy Mayor of Moscow in the Moscow Government for urban planning policy and construction, work on the architectural decoration of the service premises and the passenger area of the lobby at the Maryina Roshcha metro station of the northeastern section of the Bolshaya Koltsevaya Line (BKL) of the Moscow Metro is being completed.

Andrey Bochkarev also asserted: “Architectural and finishing works in the vestibule of Maryina Roshcha station are in the active phase. The rough finish has been completed in the office premises and the installation of equipment and engineering systems is underway. The readiness of the architectural decoration of the passenger area of the lobby has reached 90%. In particular, granite floor slabs were recently laid and hemispheres were installed, which are one of the design elements of the station.”

Following completion of the installation of double-glazed windows made of tempered safety laminated glass in the lobby, previous fall, Yury Kravtsov, General Director of Mosinzhproekt JSC (general designer and general contractor for the construction of new lines and stations of the Moscow metro), noted that a total of around 90% of monolithic work at the station was completed.

“The installation of internal walls and partitions is nearing completion. At the platform section of Maryina Roshcha, architectural finishing will begin after the completion of concrete laying and installation of metal structures,” said Yury Kravtsov.

He continued: “Maryina Roshcha is a deep-laid pylon station with an island-type platform. On the basis of the new BKL station, a large transport interchange hub (TPU) will be formed: passengers will be able to transfer not only to the station of the same name of the Lyublinsko-Dmitrovskaya line but also to MCD-2.”

Comprising of the Sokolniki and Rizhskaya stations under construction, a connecting branch to the Nizhegorodskoye electric depot, as well as the already built Aviamotornaya, LefortovoIn Elektrozavodskaya stations, temporarily functioning as part of the Nekrasovskaya Line metro, in addition to Maryina Roshcha, the general construction readiness of the northeastern section of the Big Metro Ring is 86%.

The Moscow Mayor Sergei Sobyanin, who inspected the construction of the Maryina Roshcha station on the Big Circle Line of the Moscow Metro, stated: “One of the most important sections is the northeastern section. Of the seven stations, four have already been launched and three stations are under construction. Maryina Roshcha is one of the most difficult stations. It is being built in a closed circuit underground, this is the most complex, hard work.”

Additionally, the necessity of finishing the main work at the BCL stations under construction before the end of the current year, was the mayor’s emphasis.

With a length of over 70km, the construction of the Big Circle Line is the major project of the capital’s metro construction, while it will include 31 stations, 22 of which are already open to passengers.

Landmark in the Mlinarji Tunnel

The Cluj-Napoca Subway in Romania