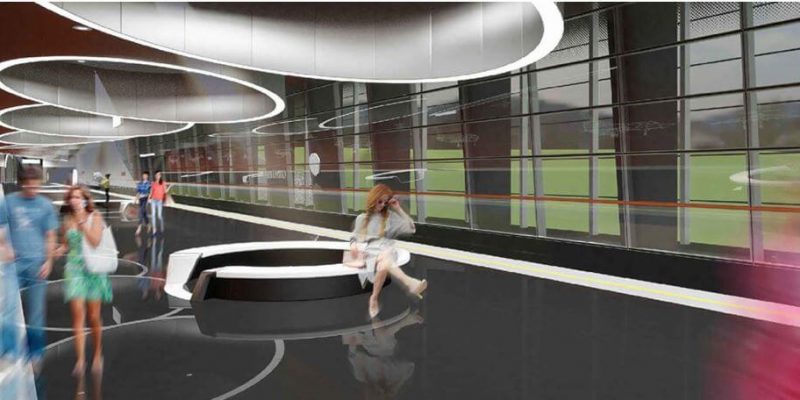 Construction of the left running tunnel between the Pykhtino and Vnukovo stations of a new section of the Kalininsko-Solntsevskaya line of the Moscow metro, has been started using the Roza tunnel-boring shield. This was announced by Andrey Bochkarev, Deputy Mayor of Moscow in the Moscow Government for urban planning policy and construction.

According to Andrey Bochkarev: “Shield Roza began construction of the left distillation tunnel with a length of about 1 km between the stations “Pykhtino and Vnukovo on the site of the extension of the yellow line. Earlier, this shield completed the tunneling towards the operating Rasskazovka station.”

Moreover, the Deputy Mayor stated that following the completion of the previous tunneling, the shield was separated in a few weeks at the site behind the Rasskazovka turnaround dead ends, placed to a new location on the opposite bank of the Likova River from Pykhtino, and installed in the starting pit.

“When traveling from the city center to the airport, trains departing from the Pykhtino station will cross the river along the new metro bridge, and only then go into the underground tunnel towards Vnukovo. Now monolithic work is underway at the Pykhtino and Vnukovo stations, the readiness of the main structures is 64% and 28%, respectively. The entire new section of the line is almost a third ready,” added Andrey Bochkarev.

The Rose shield’s drive path will be at a depth of 10 to 16 meters, in accordance with the comment of the General Director of Mosinzhproekt JSC (general designer and general contractor for the construction of new lines and metro stations) Yuri Kravtsov.

Yuri Kravtsov also said: “The work will be carried out in clay soils with hard-plastic loams along the existing road tunnel under the roadbed of Central Vnukovo Street and the bridge structures of the flyover to the airport station complex, while numerous engineering communications lie along the tunnel route.”

Usage of this shield in the building of tunnels in the southern section of the Big Metro Ring among Novatorskaya and Kakhovskaya, crossing about 4.3 km underground, also was recalled by the head of the holding.

It is planned that after the commissioning of a new section of the Kalininsko-Solntsevskaya line, the transport accessibility of the TiNAO of Moscow will be comprehensively improved, and Vnukovo will become the first airport in Russia with its own metro station.