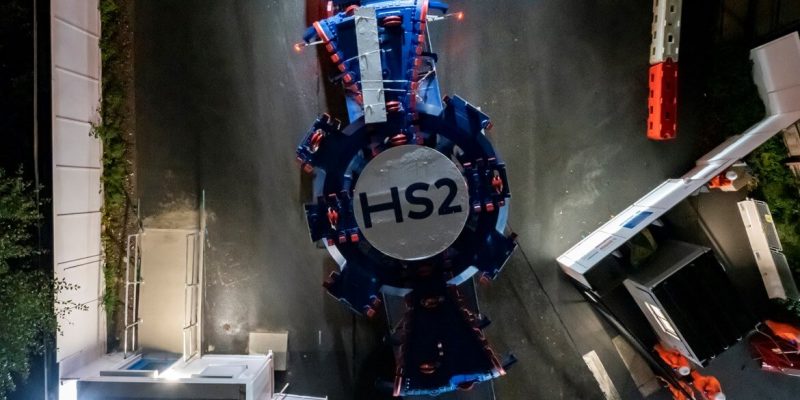 In order to excavate 13 miles of twin bored tunnels beneath London, where HS2 services are due to run, these two machines will be the first of six intended TBMs, while they will join eight other machines that are going to operate on Phase One of the HS2 project among London and the West Midlands, which’s purpose will be boring 64 miles of tunnels in total.

Providing a huge amount of logistical coordination and backing from the Police and National Highways, are the required conditions for getting the huge pieces of the TBM to the site. The largest ingredients of the machines were carried by road from Essex ports on vehicles that could bear the extra-wide loads.

According to Malcolm Codling, Client Director for HS2: “The HS2 team at West Ruislip have been preparing the site for over two years to ensure it is ready to launch the first two London TBMs in 2022. This will be an exciting step as we begin our four-year program of tunneling under London, showcasing the best of British engineering, and building Britain’s newest low carbon transport network.”

The design of these two machines is particular for digging predominantly Lambeth group (a set of geological rock strata), chalk, and London clay, and are automated to install 4,220 tunnel segment rings each, to create each 5-mile tunnel.

The TBMs will operate full 24 hours by the effort of almost 15 people at a time working in shifts, while the machines are due to work around the clock for two years, only halting at Christmas and Easter. The assembling process of TBMs is undergoing by an about 40 people team in order to prepare for the launch in 2022.

“Delivering these huge TBMs to West Ruislip was an enormous logistical challenge involving 260 deliveries, including 110 abnormal loads. Our team worked tirelessly to deliver these items efficiently, whilst minimizing disruption to our neighbors. All eyes will be on West Ruislip in 2022 as we start to build the London tunnels, reaching depths of 30m below ground,” stated James Richardson, Managing Director of Skanska Costain STRABAG joint venture.

The naming process of TBMs will commence as the determined date for tunneling to begin draws closer. Although the company already started that process, working with local schools in Hillingdon where the TBMs will be started up, the final list of the proposed names will be put to the public vote in early 2022 to help choose the names for HS2’s fourth and fifth TBM. Florence, Cecilia, and Dorothy are this project’s TBMs who have formerly begun their journeys underground.

The Florence TBM has Arrived!

Concluding Another Civil Contract for CRL1 Tunnels by Singapore’s LTA