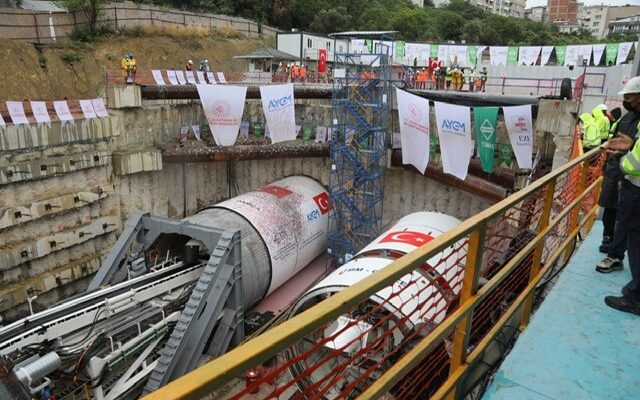 According to Minister of Transport and Infrastructure Adil Karaismailoğlu, the Gebze OSB-Darıca Sahil Metro Line Courthouse Station’s mirror junction was completed, while the light was seen and they made 63 percent advancement in the construction of the metro line.

Karaismailoğlu said:” With the completion of the line, the transportation time between Gebze and Darıca will decrease from 1 hour to 24 minutes.”

Additionally, in accordance with Karaismailoğlu’s statements, in order to rais the transportation quality even higher they continue to work intensively in Kocaeli, the symbol of Turkey’s strong industry.

Also, June 14, 2021 was the date of commencing the tunnel digging works of the Gebze-OSB-Darıca Beach Metro Line.

Emphasizing on that Gebze OSB Darıca Coastal Rail System Line is among the most important of these investments, Karaismailoğlu continued his statement as follows:

“There are 15,4 stations on our line, which we built with a 11-kilometer double-track system. We will put 90 vehicles into service within the scope of our project for our line with a design speed of 28 kilometers per hour. Our metro vehicles are produced in Turkey with 60% domestic content. Our vehicles are fully driverless and designed in accordance with modern technology. In addition, within the scope of the contract; We are also constructing a warehouse and maintenance area of 1 thousand 92 square meters, approximately 984 kilometer north of the OSB station. In the construction of the metro line; As of today, we have achieved 63 percent progress. Within the scope of the project, we completed the excavation of 27 thousand 354 meters of the 26 thousand 316 meters long tunnel. Our goal is; The aim of the project is to open the 11.5-kilometer section between Gebze OSB-Gebze Train Station (Marmaray) at the end of 2023, and the 4-kilometer section between the Beach in 2024. The light we see at the end of this tunnel; not only trade, development, travel; it is also the light of 2023. Our line, where we will combine mirrors today, will be an alternative choice to the highway connection between Gebze Organized Industrial Zone, Gebze and Darıca districts. In this way, our transportation network between regions will be much stronger.”