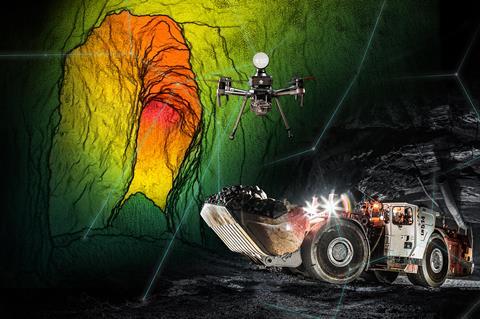 A partnership with Exyn Technologies has been announced by Sandvik Mining and Rock Technology to enhance autonomy in underground mining.
Sandvik – the Sweden-based company – ranked number eleven in the Yellow Table – has been implementing digital mining solutions for more than two decades. Sandvik says that this partnership with Exyn (specialists in autonomous aerial robot systems) will lead to a ‘transformation’ in the use of autonomous equipment in underground mining.

Sandvik’s OptiMine which has been combined with data collected by Exyn’s aerial robots, will make a progressive visualization and information of a mine’s actual environment to raise overall transparency of the mining process.
The mentioned collaboration between the two companies will require research on how to use, apply, and generate 3D views and perceptions of underground spaces autonomously, while leveraging the full potential of Sandvik’s AutoMine system.

President of Rock Drills & Technologies, Sandvik Mining and Rock Technology, Patrick Murphy said: “We are committed to empowering a transformation to autonomy in underground mining,”
He also added: “This partnership will open up unique benefits, build on our industry leading automation offering and drive faster decision-making in mining processes to seize new opportunities for improving production performance.”

CEO and co-founder of Exyn Technologies, Nader Elm, asserted: “For the first time, customers will be able to map the entirety of their underground operations, even in dangerous GPS denied environments, while making mining safer and improving productivity. Through this partnership, we hope to empower efficient decision-making for customers and drive towards the vision of fully autonomous mining operations.”