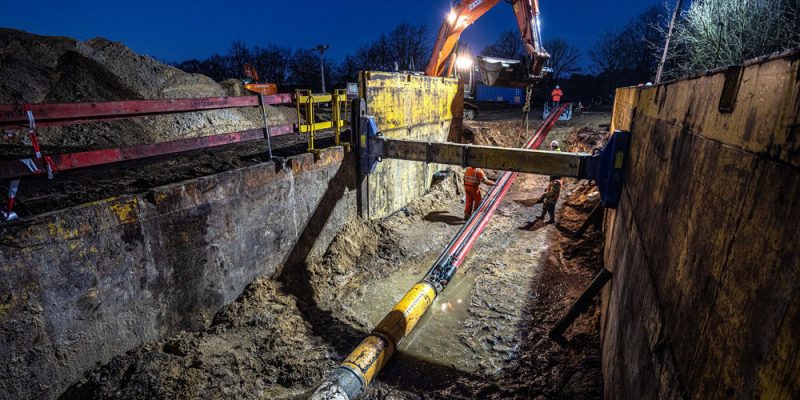 Possibility of excavating an electricity cable around 2km into the ground using a new tunnel drilling method, was proven by electricity transmission system operator TenneT, together with contractor NRG and subcontractors Denys and Kouwenberg.

As a section of the Tilburg Noord-Best route in the Netherlands, in a pilot, a long horizontal tunnel was dug using the E-Power-Pipe drilling method at a depth of about 2m and this project involves placing the 150kV aboveground connection underground.

Presenting by Herrenknecht, the E-Power-Pipe method has the ability to drill a distance of almost 2km in one drive, and at a shallower depth than the usual 5 to 25m. The new method’s shallow depth means the cable is much easier to approach and any repairs can be carried out more quickly. As a result, the security of the electricity supply is considerably higher and maintenance costs lower. In addition, TenneT says, the E-Power-Pipe causes less disruption to the surroundings.

Hans van Tol, project manager at TenneT says: “In recent years we have been working with the market to find alternatives to the existing construction methods for a high-voltage connection. One of the results is this method, which enables us to drill horizontally in one go for up to 5km in the future. This causes less inconvenience for local residents and routes/tracks may be shorter. Thanks to this method, we put far less strain on nature and the landscape, and the work can also be done faster than with open excavation, for example.”

“At least 3,000km of the underground cable must be laid in Germany and the Netherlands in the next 10 years. We want to carry out this work with as little impact as possible on the environment: city, people, and vulnerable nature,” states TenneT innovation manager Bas Swinkels.

Bas continues: “The rapid undergrounding of existing and new connections using this new method can be a good solution and has potential for the future.”

The cooperators of TenneT in searching various drilling techniques over long distances, were the contractor Heijmans and the cable supplier Prysmian, while the study finally resulted in the design of a system for underground drilling, with associated cable and the E-Power-Pipe drilling method.