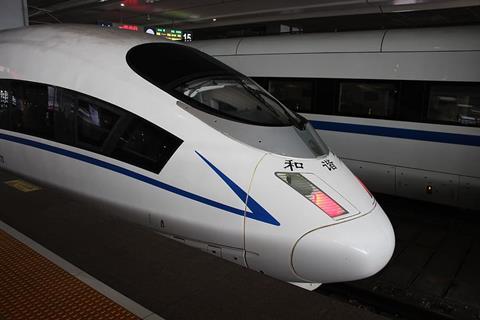 China has introduced a concept of a high-speed locomotive capable of operating on any track gauge, potentially accelerating train transport through foreign rail networks.

The 400 km / h engine has “gauge-changing bogies,” according to a Global Construction Assessment paper, which may remove the existing need for trains to halt at a gauge break or wait until new bogies are installed.

CRRC Changchun Railway Vehicles, a subsidiary of the state-owned CRRC Group, the world’s largest producer of rolling stock, developed the train, which was financed by the Chinese government’s US$ 5.2 billion research grant.

The company stated that the brand new product optimally works at temperatures ranging from 50 and 50 ° C, and is capable of adapting itself to a variety of power sources, and can also comply with railway requirements in different countries.

The notion of the train was first suggested by Jia Limin, a professor at Beijing Jiaotong University and head of China’s high-speed rail innovation program in June 2016. At the time, Jia told China Daily paper that the train will make its international debut at the 770 km Moscow-Kazan high-speed line in Russia.

CRRC Changchun Railway Vehicles is available for orders with the implementation of the prototype.

The company, headquartered in the Jilin province in the extreme north-east of China, manufactures approximately 190 electric locomotives per year, as well as 4,000 urban mass transit vehicles and 600 mainline rail vehicles per year. It has a turnover of around US$ 12 billion coming from the export of new vehicles to 20 countries.

China State Railway Group will double the length of the nation’s high-speed rail network by 2035 to 70,000 km, according to relevant sources.

China now has the world’s biggest high-speed rail network and only cities with a population of more than 500,000 will be linked through the project based on part of the outlined plans.