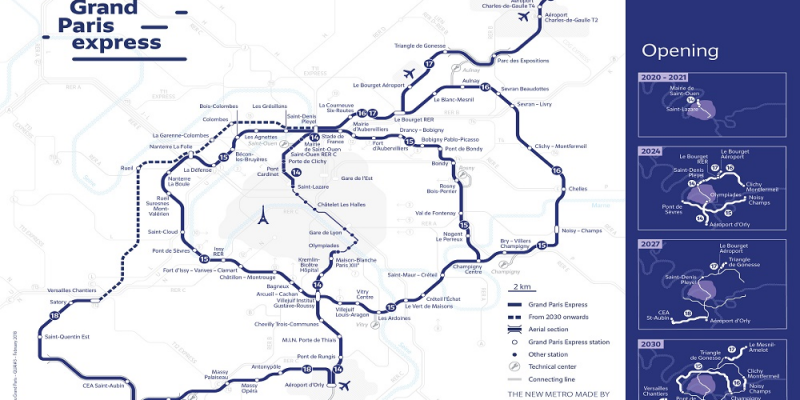 This week, the Allison TBM (tunnel boring machine) reached to the Maison-Blanche station, so the 14km tunnel which will link the Olympiades station to the future Orly Airport station south of Paris, France, is completed.

Following TBM Koumba last September and TBM Claire in December, it was now Allison’s turn to complete its drive after 18 months of excavating and a 4.8km journey.

RATP (Paris public transport operator) stated completing the tunnelling was a technical feat and a great milestone for the extension of line 14 south. All of the three TBMs worked through difficult geology in dense urban areas. Among other things, Allison excavated under former quarry galleries, the Gustave Roussy Institute, the A6 motorway and the Bicêtre University Hospital.

For linking the extended line to the current line, a 140m long tunnel was excavated using a traditional tunnelling method which is without a TBM, between Olympiades and Maison-Blanche.

In spite of the challenges and problems caused by the Covid-19 pandemic, RATP stated work on the extension was proceeding on time and schedule, with the laying of tracks already started.

Now, the 1,400t TBM Allison will be removed and disassembled from the Maison-Blanche station in sections.

Looking chronologically, first, TBM Claire was launched in April 2019 and finished a 4.2km section from Thiais to the Jean Prouvé extraction shaft in L’Haÿ-les-Roses. Then, TBM Koumba started its journey in June 2019 from the Morangis shaft and excavated a 4.1km section of the future Pont de Rungis station in Thiais. And finally, TBM Allison started its drive in July 2019 from the Jean Prouvé insertion shaft in L’Haÿ-les-Roses.

The extended line 14 is anticipated to become completed by 2024. It is worth to mention that the extension of line 14 to the south is being built by RATP as part of the Grand Paris Express project.