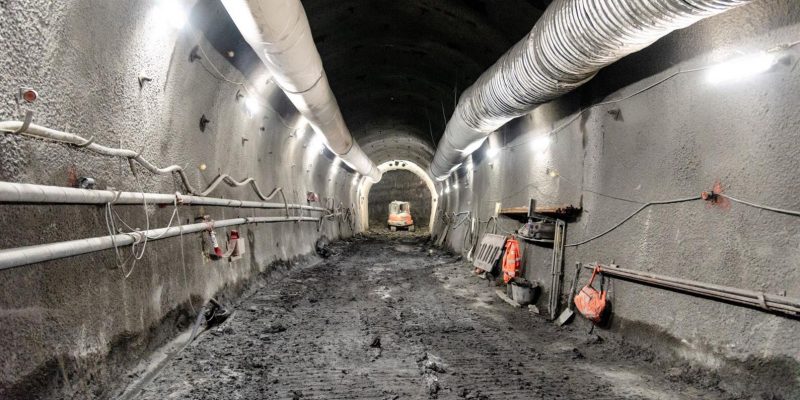 By completing the final and longest onshore cooling-water tunnel at the power station, the firm has finalized its diffused concrete lining works on the site.

Totally, Balfour Beatty says it has so far spent over 1.6 million hours on the project, across the five onshore tunnels it was assigned with building.
On the last tunnel, before being sprayed with 9,000m3 of concrete to stabilize the tunnel structure, some 600m of ground was excavated.

With the completion of spraying work, secondary lining work will follow, plus the addition of reinforced rebar concrete structures to further shore up the tunnel.

Once fully operational, the tunnels will transport more than 120,000 liters/second of water to the plant from the Bristol Channel.
For the primary cooling water system, the Balfour Beatty team has again been assigned with the tunneling work and has made three portals ready through which three TBMs (tunnel boring machines ) will launch.

Finally, there will be three 3.5 km intake tunnels and one 1.8 km outfall tunnel.
The first TBM is already under progress, and Balfour Beatty says, at the moment, it has travelled over 2.5km at a depth of 33m under the Bristol Channel.

When it cuts through the rock it is going to line the tunnel with a ring of concrete segments, each weighing more than 4,000 kg.

“This is a significant step forward in the successful delivery of the first new nuclear power station in the UK for over 20 years.” Said Alistair Geddes, Balfour Beatty project director for Hinkley Point C’s tunneling and marine project, commenting on the progress made with the onshore tunneling work.

A tunnel as an Irish Sea fixed link