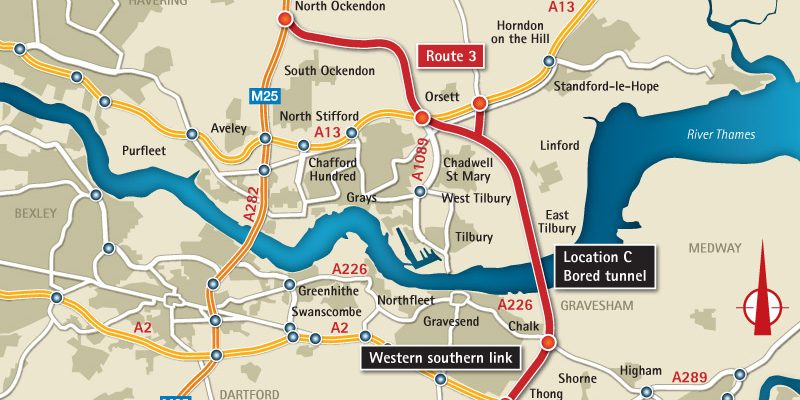 The three firms shortlisted to construct the UK’s longest road tunnel, which would be at the heart of the planned Lower Thames Crossing, have been announced by Highways England.

The Lower Thames Crossing would increase travel by almost doubling road capacity across the River Thames east of London, with 23 kilometers of new road and two 4-kilometer-long tunnels under the river.

The Tunnels and Approaches deal entails the design and building of two road tunnels under the Thames River. These tubes, with a diameter of 16 meters, will be among the world’s biggest bored tunnels. They’ll also be the UK’s longest road tunnels. The portal buildings, approach paths, and tunnel networks are also included in the scope.

“Our roads connect us – we rely on them, and they are a critical part of our economic recovery and low-carbon future. The Lower Thames Crossing is the most ambitious road project this country has seen since the M25 was completed 35 years ago. This contract proves our commitment and complete fulfillment to this project, which will support 22,000 jobs during its construction and provide a huge economic boost to the UK economy when it opens for traffic.

“This contract is unparalleled in its ambition, and we need the right partner to match that ambition. We look forward to entering into competitive dialogue with the three shortlisted companies and hope the final bids match our aspirations.”

The winning bidders and their supply chains will assist Highways England in realizing their goal of making the Lower Thames Crossing the most environmentally friendly road project ever built in the UK. They will assist with the implementation of landscaping that will improve the area’s ecological benefit by 15% by planting over 260 hectares of new woodland.

400 hectares of arable land is converted into semi-natural forests, including new wetlands, streams, ditches, and hedgerows. They will also be in charge of seven new green bridges that will connect the habits and species on both sides of the new route.

Through providing over 22,000 jobs through building and improving access to the region’s ports, logistics hubs, industrial centers, and the North of England, the scheme would help unleash a range of economic benefits.

Through drawing in investors and experience from around the transport sector, Highways England is extending its track record of successfully completing big projects. This is one of three major works projects for the scheme, with a £1.9 billion highways contract now out of tender and a £162.5 million Integration Partner contract awarded to Jacobs earlier this year.

Highways England intends to resubmit the Development Consent Order proposal later this year. In October 2020, a proposal was sent to the Planning Inspectorate, but it was withdrawn due to a lack of detail.