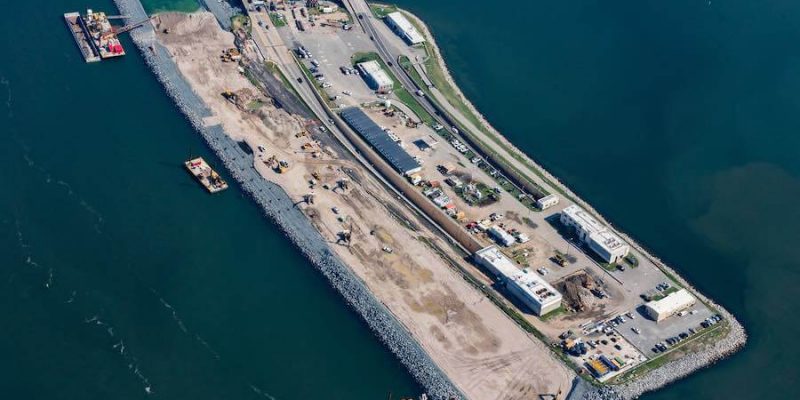 In order to prepare the tri-cell launch shaft on the South Island for use in assembling and later commissioning the TBM, the Hampton Roads Connector Partners (HRCP) construction crews have been busy advancing work in there.

In mid of July 2022, once the digging stage of the shaft was completed, HRCP placed 2727 m3/3580 cubic yards, or 6577 t/14.5 million pounds of concrete over a 24-hour period to form the 2.13 m/7-foot-thick base slab of Cell 3. The process of keeping the concrete cooled to the appropriate temperature while it was placed and then subsequently cured, was done by benefiting an innovative method by HRCP crews such as using liquid nitrogen.

Forming the majority of Mary’s 134 m/440-foot length, supporting the assembly of the TBM gantries, or trailing gear will be done by the base slab. 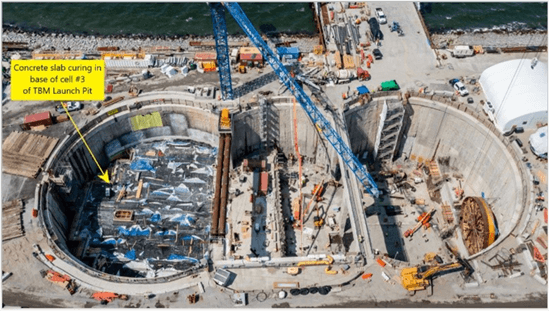 The reassembling process has been commenced since TBM Mary’s arrival on to the South Island. You can watch the related video below

It will take the HRBT Expansion Project crew between four to six months to put her back together. A welding tent provides a barrier around the clock, against severe weather conditions such as wind, rain, and direct sunlight. 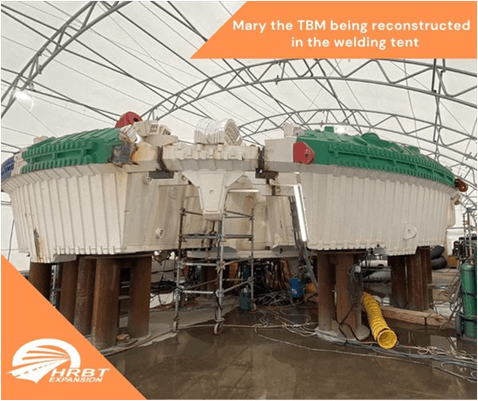 Constructing and then lowering the sealing ring (shuttering pipe) into the South Island launch pit headwall, was necessary before TBM Mary can start building the new twin tunnels, whereas these 14 m/46-foot-diameter steel rings are required to put the TBM under pressure when it first begins excavation.

Forming of another enormous concrete slab for the Slurry Treatment Plant (STP) slab on the South Island, was revealed just at the end of last month, while during the course of four months, crews have been laying tons of rebar for this slab that will serve as part of the foundation for Katherine, the STP. In order to eliminate the materials properly, this plant, which is due to be assembled this fall, will receive the excavated materials from Mary and separate the sediment from the water.