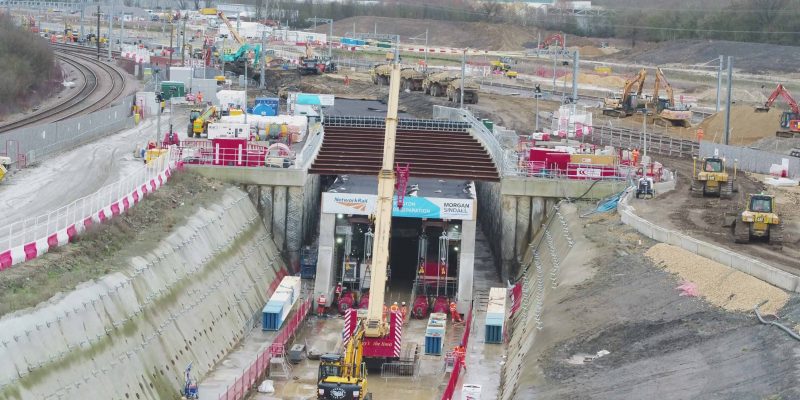 Under the East Coast Main Line near Peterborough, an 11,000 tonne angled concrete box has been moved in what is being regarded as a first for UK engineering. Morgan Sindall team completes 11,000 tonne rail tunnel push tunnel.

The gigantic concrete box was pushed under the East Coast Main Line railway for nine days between 16 and 24 January 2021.

A new rail underpass at Werrington, north of Peterborough, forms the prefabricated structure to allow slower moving freight trains to plunge beneath the passenger route and use an adjacent line northwards.

This is the first time a curved concrete box has been installed in the UK in this manner.

The method saved hundreds of hours of passenger disruption, while the main effort took nine days, which ensured that trains could continue to operate throughout. When preparing this mission, they did not realize that Covid-19 would have drastically decreased the number of passengers anyway.

Morgan Sindall and his team cut three of the tracks from the main contactor, raised the overhead wires and dug out spoil from the ground. They then put it back in order preparing for normal services to restart until the tunnel was finally underneath.

Our teams have accomplished this difficult piece of engineering in an innovative manner, which has required a reduced train service to continue for those who still had to ride, pointed out Paul Rutter, route director for Network Rail’s East Coast Route.

“I’m so proud that this project has shown itself to be one which is industry leading and that our teams have had the opportunity to use this new technique for the first time in the UK on one of the country’s most famous railway lines.”

The next phase of the Werrington project includes work on the construction of two new tracks inside the new tunnel and the associated signalling system, ready for operation by the end of 2021.

For smoother, more efficient journeys between London, the north of England and Scotland, the scheme is part of the £ 1.2bn East Coast Improvement.

Massive Tunneling Scheme Under the Earth