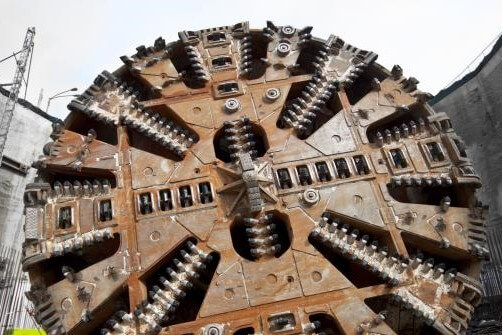 According to the project promoter announcement, plans for developing the Montreal Metro blue line have advanced after using a tunnel boring machine (TBM) for the digging process.

On 19 April 2022, the project manager for the extension Société de transport de Montréal (STM) announced a pre-qualification notice for the construction of the tunnel.

In order to progress most of the tunneling work as well as lining the metro tunnel with prefabricated concrete segments, a tunnel boring machine (TBM) will be used.

While the project will mark the first use of a TBM by the public transport agency, which operates buses and four subway lines across the city, to create the blue line extension an electrically powered TBM is going to pass through a rocky subsurface.

Due to less noise and vibration, STM selected the TBM among other excavation methods such as drill and blasting. Thus it will be less disruptive to the neighborhood.

The TBM opted for the extension should be able to move at an average rate of 13m to 15m per day.

According to STM interim CEO Marie-Claude Leonard: “This will be the first use of a TBM in the long history of the STM. It will allow us to speed up the excavation process and will help us to build high-quality infrastructure as we extend the blue line of the Montreal Metro.”

“The publication of the pre-qualification notice is great news for the STM and represents another step toward the execution phase of this structuring project for the STM, its clients, and citizens of the east,” stated STM board of directors chair Eric-Alan Caldwell.

In order to choose a name for the TBM, STM will invite the public to help and the details of the naming process is due to be revealed after the tunneling contract has been awarded.

The blue line extension project was developed following the declaration made by the Government of Quebec and the City of Montréal to revitalize the east end of Montréal.

The five new metro stations are along rue Jean-Talon, at the intersections of boulevards Pie-IX, Viau, Lacordaire, and Langelier, as well as at rue Bélanger, on either side of Highway 25, for the terminal station in Anjou.

The estimated date for completion of this line extension project is 2029.

Completing 10.5 km of the Base Tunnel in Turin/Lyon