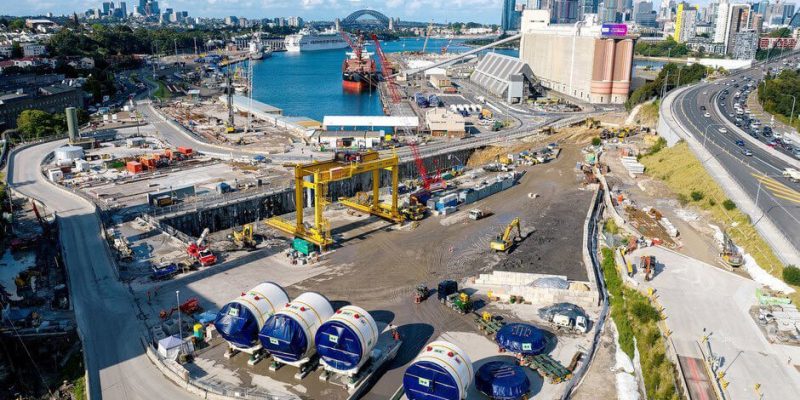 Linking the Greater Parramatta to the Sydney CBD, construction process of the 24km tunnels is commencing by arrival of the first TBMs for the Sydney Metro West project.

Arrival of two Herrenknecht machines to The Bays Station site is going to be the first in the ground for Sydney Metro West, while excavation of 11km twin tunnels from The Bays to Sydney Olympic Park will be up to these machines.

The refurbished parts from the mega boring machines that had been used on the Sydney Metro City & Southwest project, are the elements of these TBMs, whereas the cutterheads, front shields and gripper shields were originally used for the TBMs that dug the metro tunnels from Chatswood to Blues Point.

The Bays station is due to be the tunneling process starting location by these TBMs in the first half of 2023 and the late 2024 is determined date for arriving in Sydney Olympic Park. Weekly performance of these double-shield, hard rock, gripper-type TBMs will be 200m, digging through sandstone and shale.

One of the nine underground stations on this new line with 24km length is Sydney Olympic Park and the estimated time period for excavation process of this station is almost 13 months. Also in order to supporting the station box structure, as digging advances to a depth of around 27m, the installation of 114 active anchors and 467 passive bolts, as well as 2,151 rock bolts will be done.

Following completion of this station box, it is slated to be used as the extraction site for four of the six TBMs employed for Sydney Metro West.

Additionally, boring work has also begun on the station boxes at The Bays and Burwood North.

Doubling rail capacity between Greater Parramatta and the Sydney CBD, Sydney Metro West is due to be inaugurated in 2030.

Saint-Denis Pleyel Update: the Rails of Line 14 are Laid!