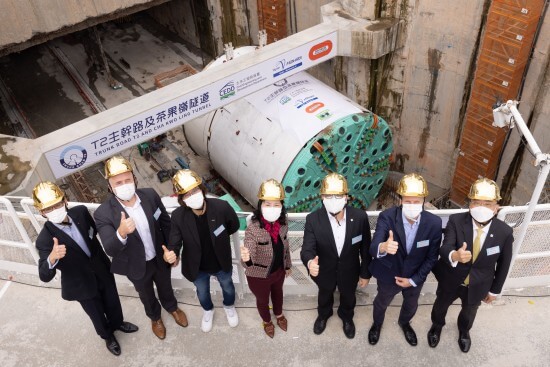 A landmark has been achieved in Hong Kong’s Trunk Road T2 project due to launching two tunnel boring machines (TMBs) that are going to excavate underwater tunnels as part of a major new road.

In order to form a vital part of a new trunk road known as Route 6, which will link the east and west of Hong Kong’s Kowloon district, each of the Victoria and Rhea TBMs with 14m diameter is due to dig 2.4km twin subsea tunnels.

On 9 November the held ceremony for the TBMs signed a milestone for the Trunk Road T2 project which is going to create the middle section of Route 6 along with the Cha Kwo Ling Tunnel.

The two TBMs are armed with accessible cutter heads after being refurbished in mainland China and upgraded by the project team for the new tunnels, hence the workers in the high pressure of the depth currently will have the chance to change the disc cutters at the cutting edge with more stable and safe conditions.

The design-build-procurement contract for the road tunnel at Trunk Road T2 with €756M (£647M) value was granted to Bouygues Travaux Publics by the Hong Kong Special Administrative Region government in November 2019.

The contract includes the construction of a dual-lane 3.4km road connecting the former Kai Tak airport to Cha Kwo Ling, of which about 3.1km is in the form of an underwater tunnel.

Additionally, second €364M (£311M) contract in order to build the Central Kowloon Route (CKR) road tunnel has been awarded to the construction engineering company while this contract comprises of construction a twin-tube tunnel with a 2.8km length_ linking Yau Ma Tei and Ma Tau Kok_, two access tunnels and a ventilation shaft.

In accordance with Bouygues statement: “both projects have complex geology and a dense urban environment, requiring a variety of excavation methods.”

Bouygues Travaux Publics Hong Kong branch head Wes Jones also added: “We are delighted to be working with the Civil Engineering and Development Department again on this vital piece of infrastructure for Hong Kong. As usual, we are determined on this project to help the industry push forward with innovative solutions that achieve our collective safety, quality, and efficiency objectives.”

Beside connecting the Central Kowloon Route (CKR) in the west to the main tunnel of the Tseung Kwan O-Lam Tin Tunnel (TKO-LTT) in the east, by Route 6, following the completion of the route in 2026 it is expected to reduce journey times between West Kowloon and Tseung Kwan O from 65 minutes to just 12 minutes.