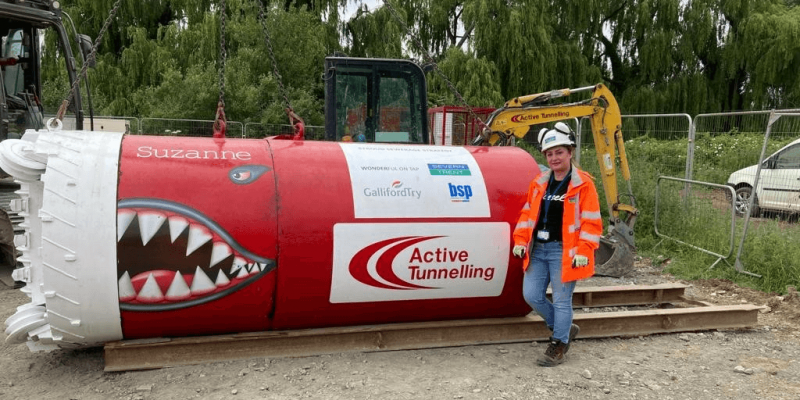 In order to assist in upgrading the old Victorian sewers in Stroud in Gloucestershire, currently two tunneling machines are excavating away on Severn Trent’s £25M project.

TBM Suzanne, which is the second tunnel boring machine of this project, was lowered into the ground close to the Stroudwater Canal towards the end of last month, while TBM Florence commenced tunneling on the project in May, starting from the Wallbridge area, from where it is making its way to the reception shaft off Lodgemore Lane.

Installing concrete pipes that measure 1.5m in diameter, the two 7.3m long, 1.56t machines will dig a total of 870m. The pipes will help form the new sewer network in Stroud.

The installation of over 3km of new pipes, as well as removing the existing large sewer pipe that runs through the canal channel in Stroud, are the contents of this £25M sewer upgrade scheme.

Managing the project’s design and build, is up to Galliford Try, which is Severn Trent’s contract partner for this project.

According to Severn Trent lead project manager Arezoo Ilbeygi: “It’s brilliant to see our second tunneling machine going into the ground as we push on with the next stage of this project. We’re really passionate about taking care of our environment, which is why we’re taking action in Stroud to protect homes and rivers from sewer flooding.”

Crossing beneath dual carriageways, supermarket car parks, and gas mains, as well as helping to protect wildlife habitats above ground, the TBMs are decreasing disruption in Stroud.

The second TBM was named Suzanne in honor of the late mother of Will Hooper, design team lead at Galliford Try. The first machine was named after the baby girl of Severn Trent community communications officer Shannon Currall, who has worked closely on the project.

The scheduled date for completion of tunneling process is August 2022.