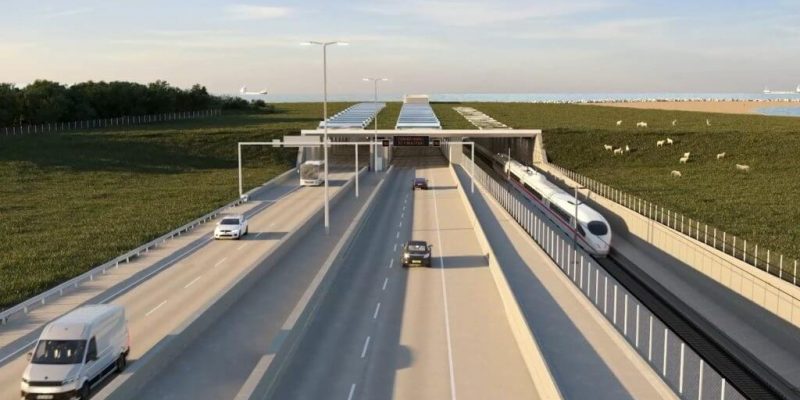 The construction process on the Fehmarnbelt tunnel’s Danish portal building, where train and road traffic will descend and make its way through the 18km long tunnel to Germany, has been commenced.

Connecting Rødby on the island of Lolland in Denmark and Puttgarden in northern Germany, the Fehmarnbelt link will be the world’s longest immersed tunnel once completed.

The two major portal areas will ensure a smooth transition between the motorway and rail line on land and the actual tunnel which will lie in a trench on the seabed. These portals will link to the tunnels.

In order to build the concrete factory which will be used to cast the tunnel’s concrete elements, work is underway at the Fehmarnbelt tunnel construction site in Denmark and each element will weigh 73,500t.

On 5 May 2022, work on the tunnel portal on the Danish side of the fixed link was started officially by FLC and it was the first time that work has begun on the actual connection to the tunnel.

By clicking the construction work on the tunnel in January 2021, the groundbreaking ceremony was held on the German side of the tunnel in December 2021.

According to FLC Lolland division manager Henrik Paaske Rasmussen: “It’s a huge milestone for us. The construction of the factory, work harbor, and workers’ town has taken up a lot of time and will continue to do so, but from now on, we will also work directly on the actual tunnel portal itself. We think that’s worth celebrating.”

“The construction of the tunnel portal will soon be one of the clearest signs yet that the construction is making rapid progress. It’s the equivalent of building the walls and roofs of a house. There are many years of work ahead, but before long you will be able to see the facade for the world’s longest immersed tunnel,” stated Femern A/S project manager Christian Kaas Oldenburg.

Recruiting between 150 and 200 tunnel workers for the construction of the portal building in Denmark, the tunnel portal is due to be ready for connection to the first tunnel element in 2023.