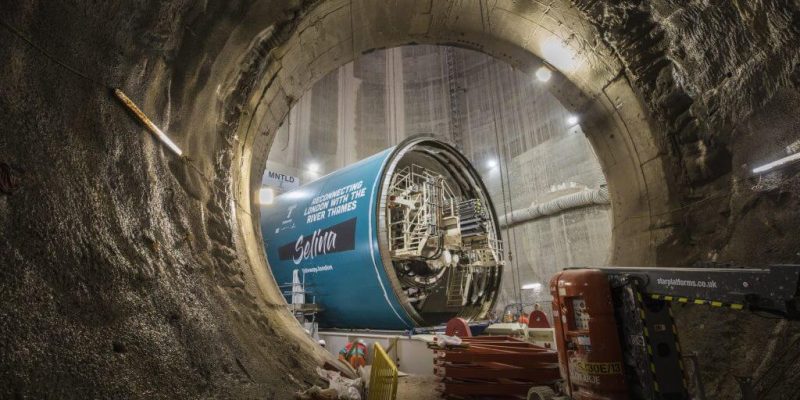 Selina, the Thames Tideway’s TBM (tunnel boring machine), which is building the last 5.5km stretch of the £4.1bn “super sewer”, has reached the halfway mark on its journey towards Stratford.

Now it is at Limehouse and is going to travel inland for the incomplete 2.75km of its journey to Abbey Mills Pumping station, where the Lee Tunnel which has been constructed already, connects the pumping station to Beckon Sewage Treatment works.

The machine has bored more than 2.75km of tunnel, excavating under the landmarks comprising Brunel’s 19th century Thames Tunnel near Wapping and King Edward Memorial Park since it was launched in January.

This TBM was the final machine on the Tideway project to get underway. It is going to complete the tunneling phase of the 25km long Thames Tideway Tunnel now under construction to intercept sewage overflows before they pollute the River Thames.

Jim Avant, the delivery manager for the eastern section of the Tideway tunnel stated: “This marks an exciting milestone for the project, and has involved a great deal of hard work from the team. As Selina embarks on the second half of her journey, we are focused on continuing tunneling safely and getting closer to delivering a cleaner River Thames for London”.

Selina is named after Dr. Selina Fox, who founded the Bermondsey Medical Mission in 1904, a small clinic that supplied medical and spiritual care to vulnerable women and children in east London.

Currently, nearly 24km of the new tunneling system has been bored below London. When the tunneling phase is finished, the essential testing and commissioning period will start before the super sewer goes operational in 2025.

Completion of the Etihad Rail Tunneling has been Marked