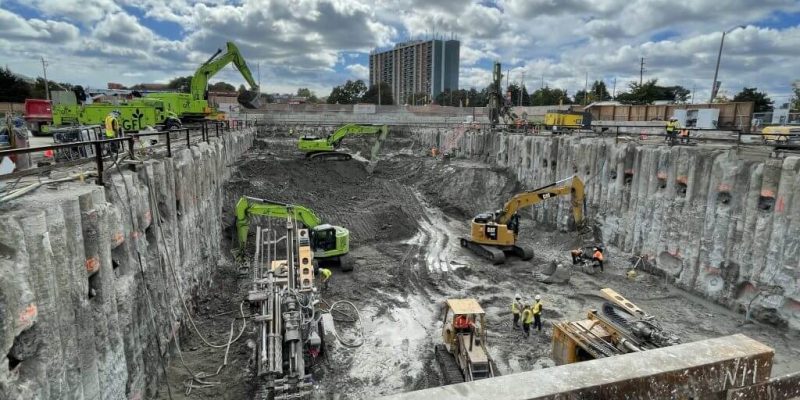 Operations on the tunnel boring machine launch shaft at the corner of Sheppard Avenue and McCowan Road in Toronto started in June.

The shaft is going to be nearly 80m long, 30m wide and 25m deep once complete.

In August, crews completed drilling over 300 secant piles to make a watertight wall near the excavation.

At the moment, excavators are boring and clearing materials from the site to make a hole suitable for the machine, which is anticipated to be lowered into the launch shaft early next year.

The machine is going to construct a tunnel with a 10.7m diameter, which will be the greatest subway tunnel in Toronto.

The Scarborough Subway Extension which is 7.8km and starts from Sheppard to Kennedy Station, is going to be the first subway project in the city to work in both directions within a single tunnel, thus requiring only one tunnel boring machine to make all the required space.

The mentioned TBM is custom-built and is being produced and assembled in Germany by Herrenknecht, the great construction equipment manufacturer, and will be making its way across the Atlantic Ocean by boat.

Earlier this year, Infrastructure Ontario and Metrolinx have finalized the project’s tunneling contract with the Strabag consortium.