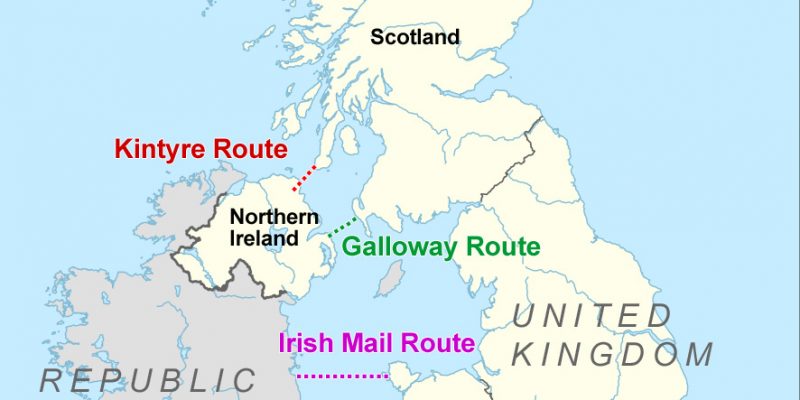 Chairman of Network Rail, Sir Peter Hendy, has opened an inquiry into the possibility of a rail tunnel linking Northern Ireland and Scotland, following Boris Johnson’s approval of a review to study the idea.

Peter Hendy told the Daily Telegraph: “If you look at the distance between Northern Ireland and Scotland it is actually no further than the Channel Tunnel.”

Experts will now research an alignment between Scotland, Stranraer, and Larne, Northern Ireland – dubbed the Galloway Route, a sea distance of around 43km (27mi). One of the challenges to be overwhelmed is going to be the 300m-deep Beaufort’s Dyke – a natural trench in the seabed. This would not only require a deep tunnel but also necessitate elimination of the considerable munitions dumped there after the Second World War.

Previously, Johnson has brought up the idea of a bridge connecting the two countries and a fixed connection is seen as upgrading connectivity mainly across the United Kingdom but chiefly to strengthen the Union. Nevertheless, experts have notified that high winds could see a bridge closed for up to 100 days a year; in opposition, a tunnel would be unaffected by the weather.

A suggestion for the future tunnel would be an Øresund-type fixed-link sequence including (from the Northern Ireland side) an artificial island, bridge and then a tunnel to Scotland.

It is possible that the final tunnel arrangement would be similar to that of the Channel Tunnel, including two tunnel tubes with a service tunnel in between, even though immersed tube solutions have also been offered.

Patong Tunnel Project to be Launched in 2023